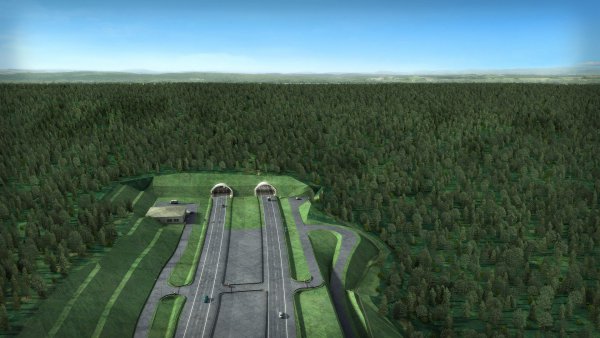 On February 24, 2022, the Podkarpackie Voivode issued a decision on a permit for the implementation of a road investment (the so-called ZRID) for the section of the S19 express road Rzeszów Południe-Babica. The investment is being carried out by a consortium of Mostostal Warszawa and Acciona Construcción.

We applied for a decision in September 2021 (click to read more).

- The issued ZRID decision is immediately enforceable, thanks to which, after the construction site is handed over by the General Directorate for National Roads and Motorways, we can immediately start construction works. In the first place, we will carry out an exploration of the area, felling trees, dehumidification and archaeological works, as well as make the necessary inventories, make access roads and implement temporary traffic organization. We are ready to carry out this demanding task - says Jorge Calabuig Ferre, Vice President of Mostostal Warszawa.

- The obtained ZRID decision proves that we have the best team of specialists and engineers who have already proved their worth on other road investments that Mostostal Warszawa has successfully implemented for GDDKiA in recent years. S19 Rzeszów Południe-Babica is the largest and most technologically advanced contract that will allow us to confirm our position as the leader of Polish infrastructure construction - says Sławomir Barczak, Infrastructure Area Director at Mostostal Warszawa.

The section to be built by the consortium of Mostostal Warszawa and Acciona Construcción is one of the most interesting and technologically difficult infrastructure projects in Poland. The task involves the construction of a 2,255 m long tunnel. The section will also include six flyovers, two road viaducts, and a collision-free passage over the railway line on the national road No. 19. Three passages for animals will be built on the section from Rzeszów to Babica.

Underground tunnel with a length of more than 2 km

The tunnel will be 2,255 meters long (along the route axis). It will consist of, among others from two aisles, which will be connected by 15 transverse passages and an additional emergency passage. Each of the individual aisles will be 12.4 meters in diameter (the drilling disc itself measures 15.2 meters).

The maximum depth of the works is over 100 meters. There are 30 alarm points and hydrant niches along the entire length of the tunnel. The tunnel will be equipped with semi-transverse ventilation. Two technical buildings and a tunnel management center will be built to ensure the operation of the tunnel. The tunnel will meet the most stringent requirements for the safety of travelers (category A according to ADR).

For the commissioning and proper operation of TBM, a power connection will be made from the 110 kV High Voltage network with a 110/20 kV substation. It is also planned to build a water intake with a water treatment plant with a capacity of up to 1500 m3/d.

The technology, know-how and equipment for tunneling to be used in this project will be provided by Acciona Construcción, the company which is the majority shareholder of Mostostal Warszawa and is the partner responsible for the implementation of the tunnel part in this project. Click to read more about the investment.