News from construction sites: Zabłocie Cluster enters the next stage of works 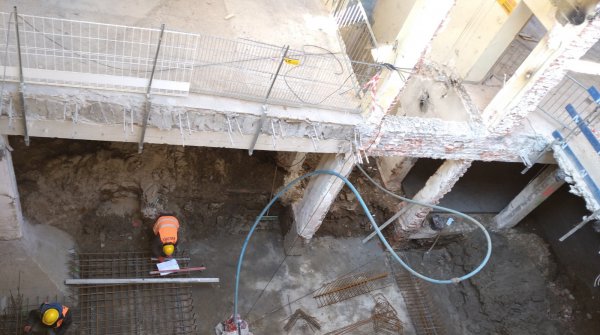 At the beginning of March, we obtained a building permit for the Zabłocie Innovation Cluster in Kraków. Thanks to this, the Mostostal Warszawa team was able to move on to the next stage of works.

Even before receiving the administrative decision, external shelters and elements of internal infrastructure, such as partition walls, suspended ceilings and old installations were dismantled. The works accelerated after the building permit was issued, thanks to which the demolition of the external walls in building A as well as the elevator shaft and staircase in building B was completed. There are also cable routes as well as rainwater and sanitary sewage systems at the basement level in building A.

- Obtaining a building permit allowed us to move to the proper stage of works. At the same time, the procedure of approving the detailed design with the Investor is in progress - says Maciej Popiołek, Contract Manager.

The Social and Economic Innovation Cluster Zabłocie 20.22 will be built on the basis of two warehouse buildings at ul. Zabłocie, in the area of ​​the railway tracks. It is an idea for a common space that is to provide technical and organizational conditions for work, study and leisure for various environments: startups and micro-enterprises, creative groups, social organizations, residents and informal groups, as well as anyone who is interested in developing their activity. The local government will also participate in the functioning of the Cluster. It is planned that municipal institutions responsible for supporting social initiatives, dialogue and cooperation with social organizations will have their headquarters in the new space. The value of the contract with the Board of Municipal Investments in Krakow is almost PLN 40 million gross.