We will build 12 km of S7 Załuski-Modlin road. Agreement signed! 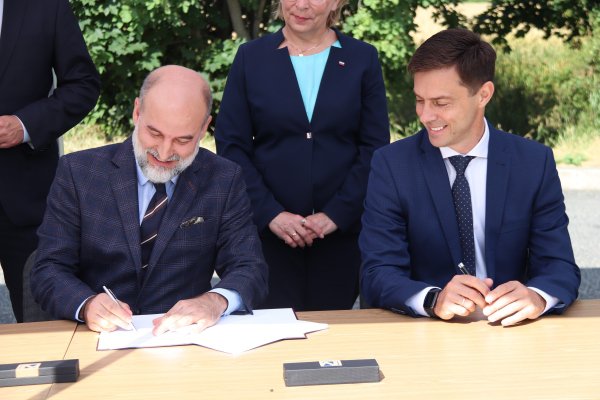 On July 9, 2020, we signed a contract for the design and construction of a 12 km S7 express road from the Załuski junction to the Modlin junction. Gross contract value: PLN 635.06 million.

- The first investment carried out by Mostostal Warszawa was the reconstruction of the Poniatowski Bridge in Warsaw. Even more so, as a company that has already started its 75 years of activity in Mazovia and with infrastructural and road investments - I believe it is symbolic that we are returning to road construction in this province as well - says Jorge Calabuig Ferre, Vice President of the Management Board of Mostostal Warszawa.

The ceremonial signing of the contract was attended by, among others, Andrzej Bittel, Secretary of State at the Ministry of Infrastructure and Tomasz Żuchowski, acting as General Director of National Roads and Motorways. On behalf of Mostostal Warszawa, the contract was signed by Jorge Calabuig Ferre and Sławomir Barczak, Infrastructure Area Director.

As part of the task, Mostostal Warszawa will prepare a construction project, obtain the necessary decisions, and then build 12 km of the S7 express road with a dual carriageway section with three lanes, which will be built on the site of the current national road No. 7. Two road junctions will be built: Załuski and Ostrzykowizna. A fragment of the new route of national road No. 62 will be built near the Ostrzykowizna junction. In addition, roads parallel to the adjacent area, environmental protection equipment and road safety will be built.

In order to minimize difficulties for drivers, we will carry out construction works without limiting the use of the current road. During the works, drivers will have at their disposal two lanes in each direction. To this end, we will first build a local road system.

Gross contract value: PLN 635,06 million.
Completion date: 45 months; winter periods are included in the design time (i.e. from 15 December to 15 March), winter periods are not included in the works duration (i.e. from 15 December to 15 March).
Payment term: 30 days from the date of receipt of the invoice.
The maximum warranty period is 10 years.
Performance bond: 10% of the gross contract value in the form of a bank guarantee.

In the photo (from the left): Jorge Calabuig Ferre and Sławomir Barczak, photo: MW.