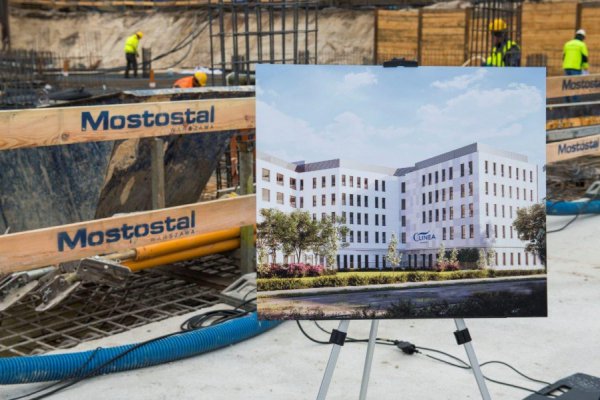 On 20 November 2019 took place the ceremony of laying the foundation stone for the construction of the "Rehabilitacja MIĘDZYLESIE" Clinic. The general contractor for the investment is Mostostal Warszawa.

The complex of healthcare buildings that Mostostal Warszawa will build for ORPEA Polska is a hospital with a rehabilitation profile and a building with accommodation services along with technical rooms and an underground garage. The "Rehabilitacja MIĘDZYLESIE" Clinic will be the first facility of this type of ORPEA Polska Group. Clinic's patients will be able to use, among others, the therapeutic pool, cryochamber and kinesitherapy rooms. The new facility - under the CLINEA brand (brand for rehabilitation services of the ORPEA Group) - will be opened in 2021.

During the ceremony, the foundation act was signed by Beata Leszczyńska, President of the Management Board of ORPEA Polska as well as Leszek Baraniewski and Jacek Wiśnicki, Deputy Mayors of the Wawer District. On behalf of Mostostal Warszawa, the event was attended by: Jacek Szymanek, Member of the Board, Maciej Sasak, Director of the Eastern Area, Radosław Łoboda, Commercial Director in the Eastern Area, Tomasz Okoń, Director of the Group of Contracts, Waldemar Giedrojć, Contract Manager and Paweł Kwiecień, Spokesman.

- Mostostal Warszawa will implement another contract in the area of investments that are in particular socially significant, i.e. healthcare. Our company has always been active in this area. During 75 years of our activities, we have completed dozens of investments of this type - says Jacek Szymanek. - A team of the best engineers will be responsible for the construction. The experience of Mostostal Warszawa, as well as the competences of our employees make me confident about the success and completion of the investment.

ORPEA Polska has been operating since 2001. The company is a leader in stationary long-term care. It offers nearly 1,000 places at modern nursing homes for seniors (under the MEDI-system brand and ORPEA Rezydencje) and clinics specializing in neurological, and cardiological rehabilitation (under the brand MEDI-system and CLINEA Clinics). Facilities and clinics are located in Mazowsze, Chorzów and Wrocław, where apart from nursing homes there are Apartments for Seniors (assisted living formula). Seniors stay at their homes, require daily support and round-the-clock care due to their age and health conditions, as well as people who finished their hospital stay following a disease or surgery, but are not yet ready to function independently. Among those under care there are also people affected by the so-called dementia mainly Alzheimer's and Parkinson's disease. A team of over 750 people (nurses and carers, physiotherapists, doctors, occupational therapists, speech therapists and psychologists, auxiliary and administrative staff) cares for the health and safety of residents and patients. ORPEA Polska offers care in rehabilitation wards and in care and treatment centres under the National Health Fund or in a commercial form. The company is part of the largest network of ORPEA nursing homes and rehabilitation clinics in Europe, present in the industry since 1989 with a potential of nearly 94,000 places (over 930 facilities) in 12 European countries, as well as in Brazil, China, Chile and Uruguay.