We are building for Medical University of Gdańsk 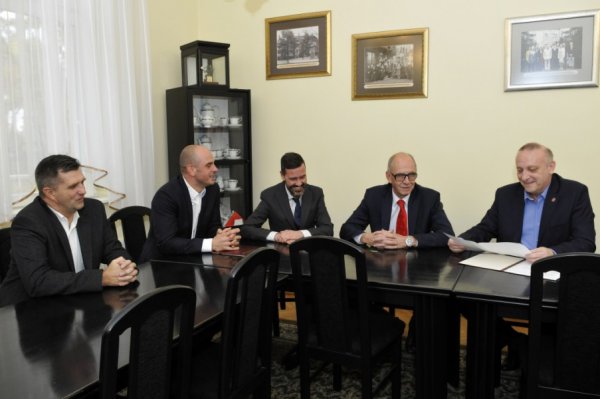 Mostostal Warszawa again the best! North Branch got a new contract in Pomorze worth 21 444 552,02 zł. The investment will realize consortium formed by Mostostal Warszawa (leader) and Acciona Infraestructuras (partner). On behalf of consortium José Ángel Andrés López, Vicepresident of the Board for Production and Maciej Sasak, Director of North Branch signed the agreement.As a result we will be a general constructor of so called „zero state” of Non-invasive Centre of Medicine in Gdańsk. At the turn of the year, university authorities will announce next tender – for completion of the construction.

- We are glad that we can strenghen our presence in Pomorze. We have recently signed contract for construction of the Voivodoship Police Headquarters in Gdańsk. We also got the chance to do the construction works for courts in Gdańsk. Now, we are begining working for MUG. As the general constructor of the first phase of the project we will be responsible for the comprehensive implementation of all the necessary works and actions of building’s B, C, D „zero state”. For the moment, the scope of our works includes desassemblies, demolitions, earthworks and works aimed at securing existing networks. We will also build from scratch various networked or structural elements, for example: floor slab of building A with reinforced technological channel and all the necessary elements of waterproofing and damp-proofing. In half a year we will try for another contract related to the construction of CMN – said Maciej Sasak, Director of the North Branch of Mostostal Warszawa.

As a part of a contract concluded, Mostostal Warszawa will also perform: reinforced concrete foundation structures, walls and ceiling above the -1 level of the buildings B, C, D along with the necessary elements of waterproofing and damp-proofing, manufacturing elements of sanitary sewerage and rain underfloor drainage system, manufacturing elements of earthing and lightning protection installation, construction of sanitary sewerage connection, securing trenches, among others, reinforcements of excavation made of CFA piles, sheet pilings.For the realization of these tasks Mostostal Warszawa has five months after signing the contract.

"Construction of Noninvasive Medical Center Medical University of Gdansk" is a long-term program adopted by the decision of the Council of Ministers. The realization of the investment is planned for the years 2015-2020.