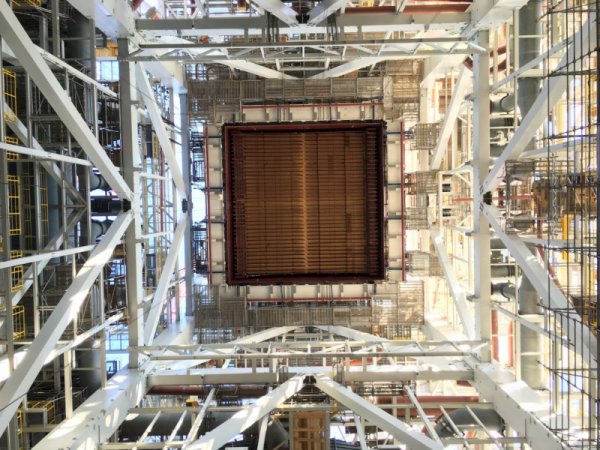 Another milestone was completed successfully at the construction site of two power units no. 5 and 6 at Opole. The internal grate of boiler pressure subsystem was lifted to a level of 120 metres. The total tonnage of the erected structure is nearly 3 200 tonnes!

Grate connected to the boiler

Assembling works of pressure parts of boiler no. 5. includes installation of internal grate. The erection process had started at the end of January this year and lasted four months. In the activities participated nearly two hundred people. Another pressure parts to be erected at the target height were hangers, boiler house roof, steam superheater and water heater coils.The total weight of all items was 3 185 000 kg. The internal grate was suspended by means of 8 hydraulic hoists, each of 600 kg lifting capacity. Then, it was connected to the main structure of the boiler. In the course of the preparation were made 7 500 welds. Ultimately, 65 000 welds will be created on each boiler. The completion of the assembly brings us closer to carry out the hydraulic test.

New power units in Opole Power Plant, of 900 MW of gross power each, will be fired with pulverized coal supplied from the Upper Silesia. The units will consume 4 million tonnes of coal and will produce approximately 12-13.4 TWh per year which should ensure stable electricity supplies for more than four millions households. Commissioning of unit no. 5 is scheduled for July 2018 Unit no. 6 will be launched in March 2019.

Construction of the power blocks in Opole Power Plant is executed according to the schedule. The work progress exceeded 46% as of at the end of May and that means the biggest energy investment in Europe reaches its halfway point soon. The project is worth more than 11.6 billion PLN gross. Consortium composed of companies as follows: Mostostal Warszawa, Rafako, Polimex-Mostostal together with Alstom Power (chief supplier of key appliances)is to build new power blocks at Opole.