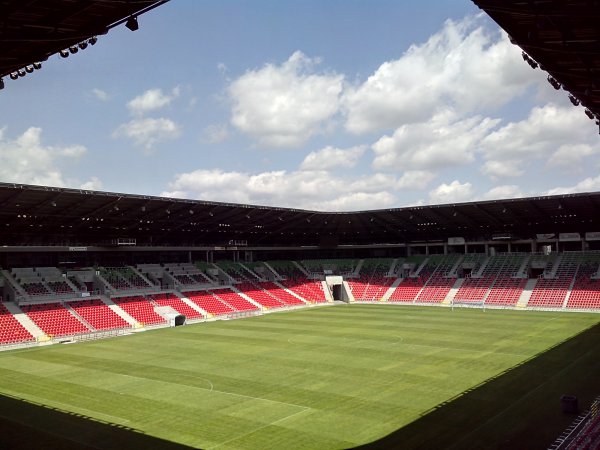 The opening ceremony of the new city stadium in Tychy took place on Saturday. This breathtaking facility is designed to accommodate 15,000 spectators and meets all the requirements of UEFA and FIFA. This is yet another showcase sports facility in the portfolio of Mostostal Warszawa – the main contractor of the PLN 129-million project.

The opening ceremony of the new city stadium in Tychy took place on Saturday. This breathtaking facility is designed to accommodate 15,000 spectators and meets all the requirements of UEFA and FIFA. This is yet another showcase sports facility in the portfolio of Mostostal Warszawa – the main contractor of the PLN 129-million project.

The opening of Tychy stadium was heralded as the most important football event in Upper Silesia in 2015. On July 18, the stadium’s stands were packed with 15,150 fans who came to see the inaugural friendly between GKS Tychy and FC Köln. Köln, who won the match 1:0, were not selected randomly – GKS Tychy and the German team met before in 1976 in the UEFA Cup. The same players who played back then almost 40 years ago had the chance to meet again during Saturday’s opening ceremony and they received a standing ovation when they walked onto the pitch.

"Tychy City Stadium is yet another sports-related project alongside the Kraków Arena or Łódź Atlas Arena completed by Mostostal Warszawa. For us, the opening of the stadium was the culmination of two years’ intensive work on this state-of-the-art facility. We're hoping that the Tychy stadium will become a part of the city's landscape and will serve both residents and football fans throughout the entire country. We want to thank the city authorities, employees and everyone involved in the project, who can be justly proud of themselves," said Alojzy Malczak, General Construction Division Manager at Mostostal Warszawa.

"I'd like to extend my special thanks to former Katowice Division Manager Julian Kiełbasa and to the current Southern Division Manager Janusz Stanaszek as well as to the entire project team headed by Rafał Kuraj,who was in charge of the project," added Alojzy Malczak.

The previous stadium in Tychy, which was almost 40-years old, was demolished in 2013 and Mostostal Warszawa replaced it with one of the most modern sports facilities in Poland. The facility, which was built on 17,000 m2 area with a cubic capacity of 141,000 m3 and a 105x68 metre playing area, meets the UEFA and FIFA standards. The stadium has 15,150 seats with 24 bearing the club logo, as well as 10 VIP boxes and one Super VIP box, which on Saturday was made available to Jerzy Dudek and Mariusz Czerkawski. The pitch is illuminated by 218 lamps allowing Full HD broadcasts to be made. The facility is fitted with a fitness centre, ten changing rooms, a cryochamber, gym and surgery. Coaches and referees are free to use two changing rooms. In addition, the facility also includes a restaurant, three conference rooms and the Tyska Galeria Sportu sports museum, which will open soon.

The stadium will serve primarily people from Upper Silesia and the stands will become a meeting place for whole families. The city’s authorities have taken appropriate measures to ensure safety through a fan identification system at entrances and a CCTV system designed to support security staff. In addition to matches, the stadium will host other events such as concerts, festivals and sport competitions.