Transport of TBM getting closer to the destination 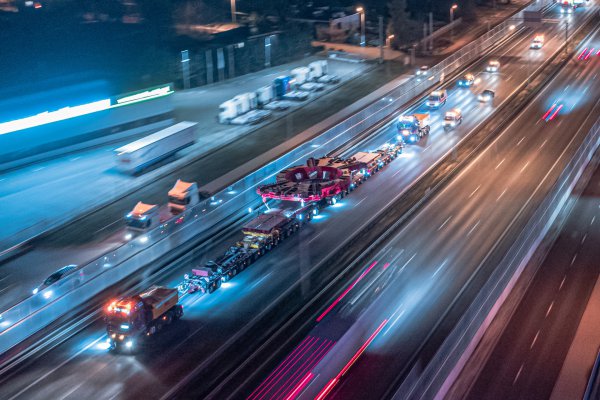 Last weekend, a column carrying a TBM (Tunnel Boring Mashine) for drilling a tunnel on the S19 road in the Podkarpacie region passed through Warsaw. It is a unique logistic operation, record-breaking on a national scale. No wonder it attracts the attention of the media, as well as hundreds of people who flock to the route of the machine.

The machine started its journey from Spain a few weeks ago. TBM machine sailed from Santander to Szczecin, from there it was transported on a barge to Opole. Land transport began there. Currently, the convoy has passed the capital and moves along the previously developed route. The road from Opole to Rzeszów, which is used by transport, is not the shortest, but it leads along the highest-class roads and bridges that are able to carry such a load.

After all the elements have arrived, the assembly of the machine itself will begin. Daily, the colossus will drill and cover a 9-meter tunnel, and its task will be two tunnels over two kilometers on the S19 route.

- It is certainly the largest such transport in Poland, both in terms of the length of the land route, which is about 800 km, and the size of the load. The set carrying the largest element, i.e. the head, measures over 70 m and weighs about 500 tons. The convoy carries a total of 5 loads and travels only at night at a speed of 10 km / h on bridges and 20-30 km / h on straight sections. It is undoubtedly an unprecedented undertaking in the country that required a great deal of preparation. The S19 section, which will be built by Mostostal Warszawa and Acciona Construcción, will be one of the most interesting and technologically most difficult infrastructure projects in Poland - says Jorge Calabuig Ferre, Vice President of the Management Board of Mostostal Warszawa.

This spectacular transport is reported by all media, including the main issue of Fakty TVN.

We encourage you to familiarize yourself with the selected materials:

Tunnel on the S19 route

The nearly 2.3 km long road tunnel will consist of two one-way aisles connected by 15 transverse passages and an additional emergency passage. Each of the single aisles will have an internal diameter of 12.4 m. There will be 30 alert points along the entire length of the tunnel. There are also 15 hydrants in each tunnel nave and two hydrants in the zone of the northern and southern portal.

The implementation of the investment is a real engineering challenge. Hilly terrain necessitates the construction of high heights and a tunnel located up to 100 m below the surface. The complicated and complex soil and water conditions occurring at the planned investment site are also important. The consortium of Mostostal Warszawa and Acciona Construcción is responsible for the implementation of the contract, and the investor is the General Directorate for National Roads and Motorways.