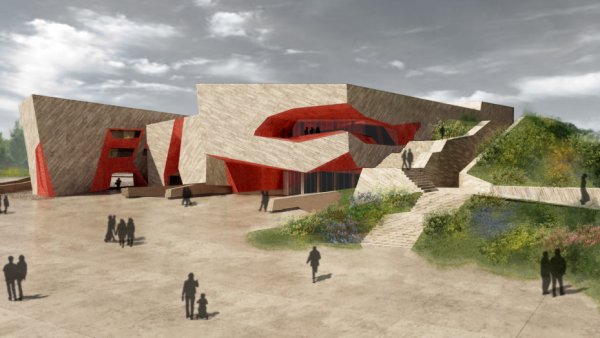 Topping-out ceremony has taken place in Cultural and Congress Hall in Jordanki in Toruń. It is a symbolic moment of the completion of roof construction at its heighst point. The realization of one of the bigest cultural investments of Touń is coming to an end. Soon, Toruń will boast one of the most modern concert hall’s in Poland. The general contractor of the investment worth PLN 157,97 mln gross is consortium: Mostostal Warszawa (leader) and Acciona Infraestructuras (partner).

„In every big city in Poland we can find another building that Mostostal Warszawa built which not only meets its target functions but also creates city’s caracter and climate. This is that part of the city without which it is difficult to imagine today’s landscape of Toruń. Today, standing in front of you, where Cultural and Congress Hall in Jordanki is rising, I am proud and happy that we can make a positive contribution to the development of Toruń. This is the next investment of Mostostal Warszawa, after Sports Centre at Nicolaus Copernicus University, Collegium Humanisticum or Centre of Quantum Optics in this beautiful city. For us, it is a great satisfaction and a reason to be proud” – said during ceremony Alojzy Malczak, Director of General Construction Division Mostostal Warszawa.

The construction works have been performed according to the schedule since April 2013. Ultimately, beautiful facility of uncommon architecture, designed by world class Spanish architect Fernando Menis, will rise. The investor of the project is Toruń City Hall. The building will have six storeys and 22 000 m2 of surface. The interior will house: a performance stage fitted with an orchestra pit, a stage with 880 seats and an outdoor stage with 330 seats as well as utility, administration and social rooms. Near the facility will be localized parking with 185 places.

The multi-purpose centre will include several modules connected at the top by glass plates, which will provide illumination and space. Moreover, the double-wall system will ensure heat savings and insulation from street noise. Multifuncional concert hall, erected on the city’s outskirts, near historic urban complex of Toruń which is enlisted on the World Cultural Heritage List UNESCO, will favour organisation of concerts, theatrical, symphonic and congress events.

The key objective was to create a multi-functional facility allowing a variety of symphonic and other concerts, theatrical performances, musicals, film projections and fashion shows to be organised. It will also provide educational and exhibition functions. Torunian Symphonic Orchestra will also find there its headquarters. One of the implemented technologies will be mobile wall between main hall and chamber room which will be the highest movable structure in Poland. Moreover, this element will allow to change hall’s acoustics depending on the needs. On one side of the pivoting pockets will be sound absorbing surface while on another – sound diffusing.

The autor of this amazing building is well-known Spanish design office – Menis Arquitectos. Fernando Menis, chief designer and specialist of using concrete in the architecture reinterpreted the city's history by blending the modern brick and concrete design into the city’s historical architecture. Specifically for the needs of the project at the construction site was set up a concrete mixing plant. All decisions concerning the selection of the materials made chief architect who looking for the proper colour of the concrete, has visited Polish melaphyre mines (agregate used in production of concrete in CKK Jordanki) to check its quality. Mostostal Warszawa has prepared many examples of which Fernando Menis chose two the best that matched to the colour of the brick – on the internal walls, and those of the building’s fasade. His idea was that board pattern impressed on the surface was clearly visible. In addition to that in all the building are being performed various internal finishes of the walls, for example in representative surfaces the design of boards is horizontal and vertical in the rehearsal room.

„What a beautiful and modern building it is, we will have a chance to see in autumn 2015 when Cultural and Congress Centre in Jordanki will be opened and Toruń will gain the bigest cultural investment in its history. It is for us, as contractors, a great satisfaction and a reason to be proud that we can be a part of it!” – added Alojzy Malczak, Director of General Construction Division Mostostal Warszawa.