The first TBM transport arrived in Babica as planned 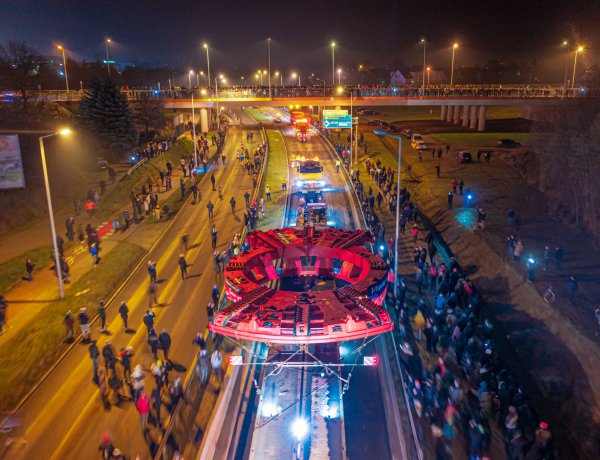 On the night of November 28/29, 2022, the TBM machine covered the last section of the route - it was transported from the Rzeszów-Południe junction to the construction site in Babica. This transport again attracted many people who gathered along the route to observe this unusual operation.

After several days and overcoming six provinces, the convoy carrying the "mole" reached its destination, i.e. the construction site in Babica. The route was planned in detail for many months by a team of several dozen, which made many bridge expertises and calculated the load capacity of all roads. However, there were places where the passage of the machine required some changes. In Rzeszów, under the railway viaduct, the asphalt had to be cut by 36 cm.

The unloading of five elements of the cutting disc and the head has already started, for which the 650-ton crawler crane will be used. Assembling the machine is a complex undertaking that will take about three months. The next parts of the machine will gradually reach Babica. When folded, the machine will weigh 4,000 tons and be 112 meters long. The diameter of the drilling disc is 15.2 m.

Tunnel on the S19 route

The nearly 2.3 km long road tunnel will consist of two one-way aisles connected by 15 transverse passages and an additional emergency passage. Each of the single aisles will have an internal diameter of 12.4 m. There will be 30 alert points along the entire length of the tunnel. There are also 15 hydrants in each tunnel nave and two hydrants in the zone of the northern and southern portal.

The implementation of the investment is a real engineering challenge. Hilly terrain necessitates the construction of high heights and a tunnel located up to 100 m below the surface. The complicated and complex soil and water conditions occurring at the planned investment site are also important. The consortium of Mostostal Warszawa and Acciona Construcción is responsible for the implementation of the contract, and the investor is the General Directorate for National Roads and Motorways.