The ETAC production plant in Tczew – the panicle was suspended! 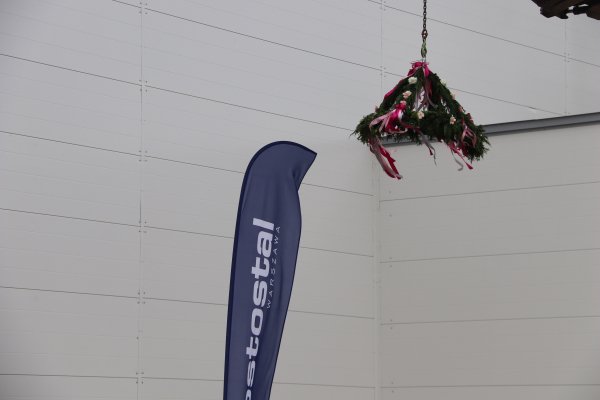 On 27 June this year we have suspended the panicle at the construction site of the ETAC production plant in Tczew. The General Contractor of the investment is Mostostal Warszawa.

The ETAC production plant has been designed in accordance with the principles of sustainable construction. Mostostal Warszawa will put into use a complex of buildings of high ecological value, which will receive the DGNB (German Sustainable Building Association) certificate at the Gold level. In addition, according to the investor's requirements, the materials that are used on the site are environmentally friendly. Important features taken into account in the selection of raw materials outside environmental aspects are their durability and resistance to dirt and destruction, and thus the properties that allow to reduce the cost of operating the facility.

- The construction we run for ETAC is interesting to us from the point of view of the modern technologies used. We declare our full readiness for further hard work, counting on the commitment and good cooperation from the Investor - says Jorge Calabuig Ferre, Vice President of the Board of Mostostal Warszawa.

The ETAC plant in Tczew is being created with the participation of Mostostal Warszawa as part of the development strategy assuming increasing the production capacities of the Scandinavian tycoon on the market of rehabilitation equipment. The plant will mainly carry out assembly operations and distribution of products to the Central and Eastern European market. Until now, ETAC's activity has been concentrated in Scandinavia. An important business partner of the Swedish producer are also the United States and Australia, where a significant part of ETAC production is sold. Together with the construction of a new plant in Tczew, the company will be provided with adequate facilities enabling further development of production and proximity to new markets.

ETAC company is a leading designer of equipment and motion solutions in Northern Europe and one of the few leading players in the international arena. It sells in Sweden, Norway, Denmark, the Netherlands, the United Kingdom, Australia and the United States, and has an extensive network of distributors in more than 40 global markets. ETAC's products are used by municipalities, hospitals, nursing homes, and in the private sector, by sellers and distributors.