The construction of the S19 Nisko Południe-Podgórze has begun 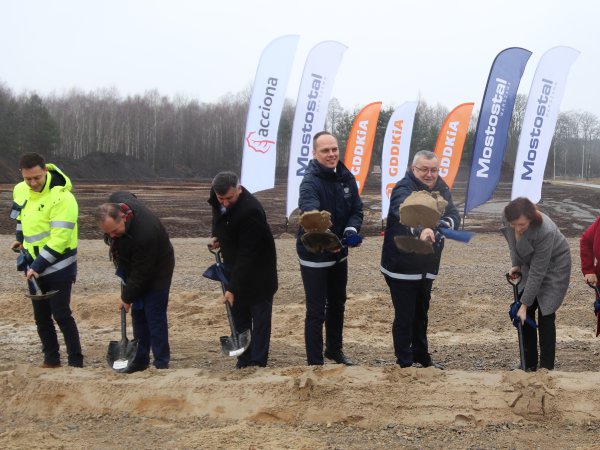 On February 21, the first shovel was officially driven into the construction of S19 expressway Nisko Południe-Podgórze. The contractor to the investment is a consortium of Mostostal Warszawa and Acciona Construccion.

- The beginning of the work is the right time to say: check. Thanks to our experience and proven staff of the best engineers, I have no doubt - we will meet this task. Good cooperation with the Employer, central and local authorities, as well as the local community will be important to us. For our part, I declare: cooperation with Mostostal Warszawa and Acciona Construcción will be effective - said Sławomir Barczak during the ceremony.

The beginning of this section of S19 was taken after the "Nisko Południe” node just after the intersection of the express road with the LK65 railway line. The expressway route runs near Nowosielec to the south, on the west side of DK19 national road (approximately parallel to it). Then, crossing without the collision with DK19 national road, it turns south-east. At 428+400 km two rest areas were located: MOP cat. II Jeżowe on the left and MOP cat. III Kamień on the right. The section ends in front of the "Podgórze” node, where the S19 expressway intersects with the provincial road DW861.

The scope of works includes the construction of a dual carriageway expressway with emergency lanes and a reserve of space outside for the third lane, with cross roads and access roads enabling connection to the existing road network along with removal of collisions with non-road technical infrastructure, environmental protection devices i.e. acoustic screens, rainwater pretreatment devices, fences and animal crossings and dense greenery belts.