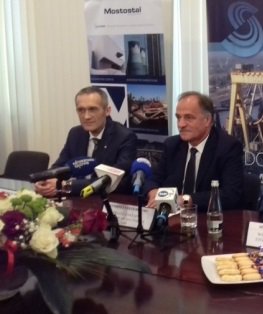 Precast segments that Mostostal Warszawa will deliver to Denmark for the construction of the high bridge are to be prefabricated in the Szczecin Industrial Park. The first elements will be ready in two months. Further, there will be 492 segments weighing over 50 000 tonnes!

In June, Mostostal Warszawa concluded a contract for the supply of precast bridge segments for the project of Danish Road Directorate entitled Roskilde Fjord Link. The bridge will be forming part of the southern ring road of the Frederikssund town in the northern part of the Zealand Island that is currently under construction. The contract is worth more than PLN 50 million. It is already known where the bridge elements are going to be prefabricated. Mostostal Warszawa has just established cooperation with the Szczecin Industrial Park.

The production process will be held in the yard adjacent to the Drzetowskie Quay. There have already been started preparations to start works. It is considered that almost 80 persons will find employment in this project. Further, Mostostal Warszawa is planning to engage students of the Technical School of Building in Szczecin to complete the task.

– The reinforced concrete elements of the bridge 1.4 km long will be prefabricated in the Szczecin Industrial Park and later transported by the sea to Denmark and erected on the site. The segments of 3 m long, 20 m wide and 4 m high including smaller supports will be constructed at the shipyard. These elements put together, create a bridge span – stated Zbigniew Przybyłowicz, Commercial Director/Western Division, Industry and Environment Protection Mostostal Warszawa.

The bridge over Roskilde Fjord will be 1360 m long and 19.7 m wide. Along this huge structure will be running dual lane highway. The Roskilde bridge will be three times longer than the Pioneers Bridge over Regalica river. Its supporting structure will be consisting of 492 segments weighing 115 tonnes each. It is considered those bridge elements will be constructed in the hydraulic formwork system. In addition, a modern technique will be used. The precast bridge elements will be stressed together by tendons which will allow rapid construction. Further, the precast segments will be transported to the area of Volcano ramp using a carrier, and from there will be loaded with gantry system (lifting capacity up to 450 tonnes) to pontoons and finally transported by the sea to Denmark.

On July, 13, was held a press conference at the venue of the Szczecin Industrial Park when Zbigniew Przybyłowicz (Commercial Director of Western Division of Mostostal Warszawa, Andrzej Strzeboński (President of the SPP) together with Marek Bączkowski (vice president of SPP) presented details of the project executed in the former shipyard.