Section of the S7 expressway between Załuski and Modlin with ZRID decision! 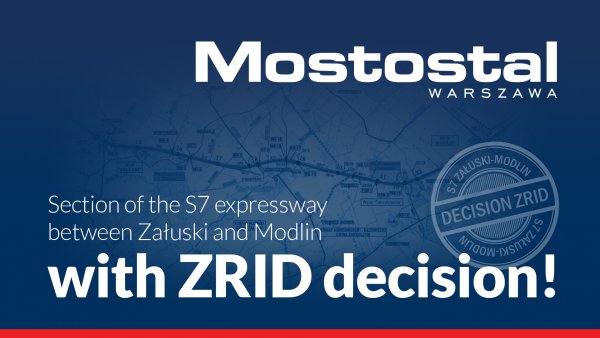 On December 30, 2022, the Mazowiecki Voivode issued a decision to permit the implementation of a road investment (so-called ZRID) for an approx. 12-kilometre section of the S7 expressway between Załuski and Modlin. The investment is being carried out by Mostostal Warszawa, and the gross value of the contract is PLN 635.06 million.

Issuance of the ZRID decision approves the boundaries of the land for the construction of the S7 Załuski-Modlin section and enables Mostostal Warszawa to start work (after handing over the construction site by GDDKiA). For the existing property owners, it is also the beginning of the procedures related to the payment of compensation, which are conducted by the Mazowiecki Voivode.

– Our team of engineers and designers, in cooperation with the General Directorate for National Roads and Motorways, developed the Documentation for which the ZRID decision was issued. Obtaining this decision is proof of the high experience of my entire S7 road construction team – says Sławomir Barczak, Director of the Infrastructure Area at Mostostal Warszawa.

– Thanks to the issued ZRID decision, after the construction site has been handed over by the General Directorate for National Roads and Motorways, we can immediately start construction works. They will be conducted with minimal disruption to drivers. During the works, they will have two lanes in each direction at their disposal – says Paweł Tuszyński, Contract Director.

In order to minimize inconvenience to drivers, construction works will be carried out without limiting the possibility of using the current road. During the works, drivers will have two lanes in each direction at their disposal. For this purpose, the local road system will be built first.