Opening of the Centre of Applied Sciences in Chorzów 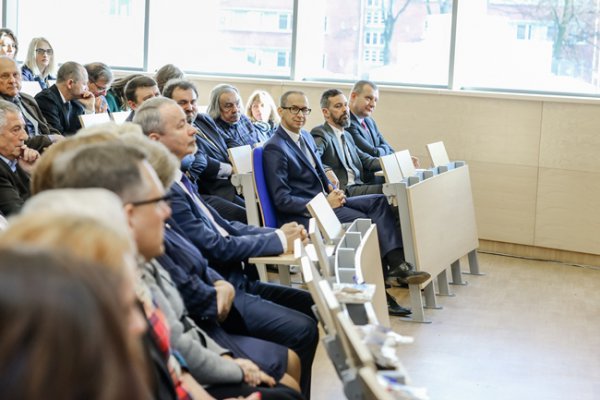 Second stage of Silesian Intercollegiate Center of Education and Interdisciplinary Research is finally over. Mostostal Warszawa extended Centre of Applied Sciences University of Silesia. The opening ceremony with participation of, among others, José Ángel Ándres López, Vicepresident for Production and His Magnificence Rector prof. zw. dr hab. Wiesław Banyś was held on 17 December 2015 in Chorzów.

In 2010-2011 Mostostal Warszawa built first complex of CNS buildings in the scope of the frist stage of silesian university’s investment. The second stage of expansion, at the corner of 75 Pułku Piechoty Street and Śląska Street, was completed at the end of 2015 as anticipated. The contract amount to PLN 21 464 056,88  gross and was realized by South Region Mostostal Warszawa under directory of Janusz Stanaszek.

In the opening gala of CNS participated, among others, prof. zw. dr hab. Wiesław Banyś, rector of University of Silesia and vicerector for finances and development prof. zw. dr hab. Stanisław Kucharski. During ceremony Mostostal Warszawa was represented by José Ángel Ándres López, Vicepresident for Production.

- „This is a great honor and satisfaction to me that today I can be here celebrating the opening of new building of University of Silesia. Mostostal Warszawa was a general contractor of both, first and second stage of the Chorzów’s Centre. As a part of the project we have built two wings for educational and didactic purposes and a communication passage. Moreover, the building has been equipped with specially matched absorption unit and modern solar collector system. It has been integrated with solar collector system, district heating and cooling substations of the existing building. Application of eco-friendly solutions will allow to reduce the running costs by using solar energy, for example, to heat production or to production of hot water. We build the future. This is mission of Mostostal Warszawa. Our motto becomes particulary important here, within walls of the university which will educate students mostly in engineer faculties: young people who bet on the future” – said José Ángel Ándres López, Vicepresident for Production.

The final shape of CNS is based on design of Jerzy’s Guławski poznanian architecture office ARPA. The manager of the project was Maciej Popiołek, and site managers were Jan Boczar and Tomasz Rywacki. Construction works were performed under directory of Krzysztof Jaworowski and Marcin Korecki.

The project has been realized as a part of funding agreement within the framework of Operational Programme Infrastructure and Enviroment. The project was also co-financed by European Union and University of Silesia. Centre of Applied Sciences – stage II Intercollegiate Center of Education and Interdisciplinary Research for University of Silesia corresponds to objectives I and III of Śląskie Voivodeship Development Strategy for years 2000-2020.

We encourage you to see photos from the ceremony.