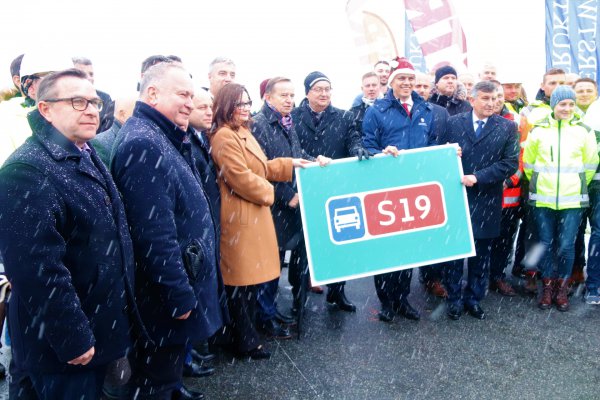 On December 6, part of the S19 expressway was made available for drivers in the Podkarpackie Voivodeship. One of the open sections, Nisko Południe-Podgórze, was implemented by the consortium of Mostostal Warszawa and Acciona Construcción.

The General Directorate for National Roads and Motorways has opened almost 30 km of roads from the Rudnik nad Sanem junction to the Łowisko junction for traffic. The whole project was divided into three tasks: Rudnik nad Sanem-Nisko Południe, Nisko Południe-Podgórze (a section implemented by the consortium of Mostostal Warszawa and Acciona Construcción) and Podgórze-Łowisko.

- The section that we are making available to drivers today is one of the many investments that Mostostal Warszawa is implementing for the General Directorate. In the Podkarpacie region, we are about to start work on the second section of S19 near Rzeszów. In May, we completed the Stalowa Wola bypass. Last year, we jointly opened the Strzyżów bypass​ - says Jorge Calabuig Ferre. - The method of implementing the section that we are making available for traffic today is a good example of the professionalism and reliability of Mostostal Warszawa.

The route of the section implemented by the consortium of Mostostal Warszawa and Acciona Construcción runs south of the town of Nowosielec, on the west side of DK19 (approximately parallel to it). Then, crossing the DK19 without collisions, it turns south-east. There are two Travel Service Points on the route: Jeżowe and Kamień. The section ends before the Podgórze junction, where the S19 expressway intersects with the provincial road 861.

The scope of works included the construction of a dual carriageway expressway with emergency lanes and outdoor space reserve for the third lane, with transverse roads and access roads enabling connection to the existing road network, along with the removal of collisions with technical infrastructure not related to the road, environmental protection devices, i.e. acoustic screens , devices for pre-treatment of rainwater, fences and thickening green belts. As part of the works, engineering structures were also completed: 5 road viaducts, 3 top animal crossings, 3 bottom animal crossings and 9 ecological culverts.