Unusual discovery during the renovation of the Gdańsk Główny railway station 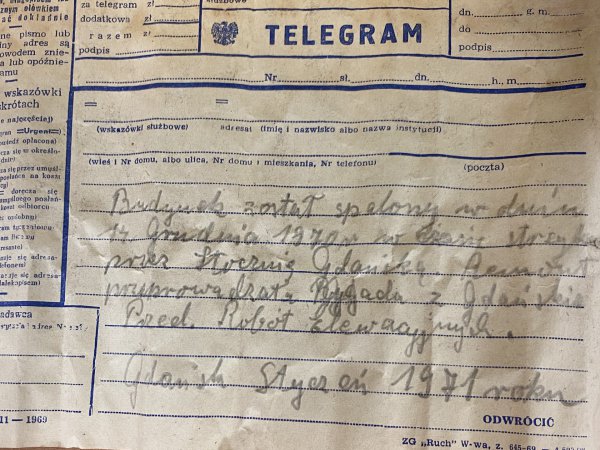 During the reconstruction of the Gdańsk Główny railway station building, the bricklayers made an unusual find. In one wall there was a bottle with a note written 50 years ago by anonymous employees on a form of a postal telegram.

The content of the note and the print on which it was written shows that it is a reminder of the events that took place in December 50 years ago on the Coast. The strike, the direct cause of which was the rise in food prices, was initiated by workers from the Gdańsk Shipyard, but very quickly other groups of citizens joined the protesters. Mass demonstrations spilled over into other Pomeranian cities, incl. Gdynia, Słupsk and Szczecin, and then to other centers in the country. As a result of the brutal reaction of the communist authorities, which engaged the militia and the army to suppress the protests, several dozen people were killed, over 1,100 injured, and several thousand people were detained. Various public buildings were set on fire during the protests, including the seat of the Provincial Committee of the Polish United Workers' Party in Gdańsk. The fire also broke out at the Gdańsk Główny railway station, in front of which there were also riots, which was commemorated by the workers carrying out the renovation of the station. Famous cultural texts refer to the events of December '70, incl. "Ballad about Janek Wiśniewski".

Content of the note (original spelling): The building was burnt down on December 14, 1970 during strikes by the Gdańsk Shipyard. The renovation was carried out by a brigade from Gdańskie Przedsiębiorstwo Robót Elewacyjnych. Gdańsk January 1971​.

- It happens that at construction sites run by Mostostal Warszawa we find items of historical value. Such experiences are important to us because they are part of the tradition of our company, which has changed the landscape of Poland over the 75 years of its operation - says Jorge Calabuig Ferre, Vice President of the Management Board of Mostostal Warszawa.

- We treat the modernization of the Main Railway Station with great care, recognizing that it is not only a public utility building, but also a pearl of architecture, serving as a showcase of the city and one of its "gates". The discovery of a bottle with a note commemorating December '70 on the 50th anniversary of these tragic events is another testimony that railway stations, like castles, palaces and fortresses, are also silent witnesses to history, and in this case to the latest history, changing the fate of contemporary Poland - says Krzysztof Mamiński, President of the Management Board of PKP SA.

The modernization of the historic Gdańsk Główny railway station is the largest project, worth over PLN 100 million, implemented by PKP S.A. as part of the Railway Station Investments Program for 2016-2023. The reconstruction of the station is carried out in consultation with the conservator of monuments, and thanks to the investment it is possible to recreate many architectural details, including cartouches with the coats of arms of Pomeranian cities, old checkout and shop windows, and referring to historic stained glass windows. The investment is co-financed by the European Union under the Infrastructure and Environment Operational Program, and the general contractor is Mostostal Warszawa.