News from construction sites: B10 Wrocław is preparing for finishing works 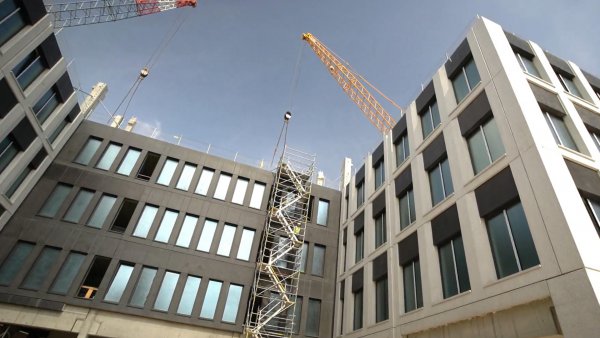 At the construction site of B10 Business Garden in Wrocław, our team is currently carrying out installation works for all industries and is preparing for road and finishing works.

In the hotel building, the team completed basic reinforced concrete works, including two communication lines and backfills around the building. The assembly of prefabricated reinforced concrete stairs is underway, which will be completed soon. The front for the assembly of the steel structure of the ground floor has been made available on time, and bricklaying and installation works are being carried out in the underground part.

In the office building, bricklaying and thermal insulation works on two underground floors have been completed. Preparations for resin floors have started. Painting works in technical and storage rooms are in progress. The electrical industry installs cable routes and wiring for lighting, fire alarms, and the sanitary industry, ventilation ducts, drainage and hydrant installations. In the aboveground part, the assembly of the prefabricated structure and the assembly of windows in the walls are continued at the prefabrication plant near Poznań.

A rainwater drainage system has been installed on Bolkowska Street, and preparations for road works have begun.

The quality of all works is constantly monitored by the team of Mostostal Warszawa S.A. and Vastint Polska.

- We are implementing a pioneering project on a Polish scale. The investment is a great logistical challenge because it is located in a place where the buildings are compact and the traffic is high. All the more, I thank our team of the best engineers for their commitment - says Piotr Budziński, Director of the Contract Group.

Two buildings are being built as part of the investment. Office building with a total area of 27 768 m2, consisting of 6 above-ground and 2 underground floors, built of reinforced concrete prefabricated elements. Hotel building with a total area of 7,656 m2, which consists of 7 overground storeys made of prefabricated modules and one underground storey. In both cases, the project involves a flat roof of the building and a green roof on the ceiling of the underground garage, as well as a glass facade.