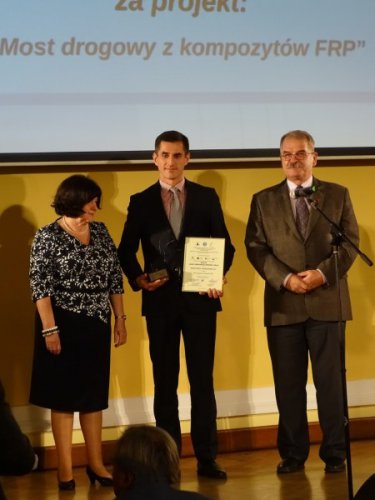 The first Polish road bridge made of composite materials have become a winner of the sixth edition of the prestigious Stanisław Staszic competition for the best innovative products. Jury awarded it with the Golden Laurel of Innovation in the category construction, public facilities, safety and fire-fighting. The bridge constructed by Mostostal Warszawa was created as a result of the cooperation between industry and science and was recognized for the form and quality of materials which are usually used in the aviation industry and aerospace.

Laurel of Innovation is a competition organised since 2010 by the FSNT Federation and Central Technical Organisation. It was created from the idea that a key for strengthening Polish economy lies in innovations followed by promotion of modern products, technologies and services and support in implementing innovative solutions. The competition was organised under patronage of three ministries: development, environment, and energy. Also, this year’ edition was supported by several well-known institutions and organisations such as e.g. Technical Inspection Office (Urząd Dozoru Technicznego), Industrial Development Agency (Agencja Rozwoju Przemysłu), Polish Academy of Science (Polska Akademia Nauk), National Centre of Research and Development (Narodowe Centrum Badań i Rozwoju), Marshall of Mazowieckie Voivodeship, Marshall of Małopolskie Voivodeship, President of the Capital City of Warsaw.

The winner of the competition – road bridge of FRP composite – is the first Polish bridge and one of the few bridges in Europe constructed from fiber-reinforced polymer matrix. This material is lightweight and resistant. The bridge has also a record span length which is 21 m. It was created by the consortium under the leadership of Mostostal Warszawa in cooperation with the Promost Consulting company and scientists from Warsaw University of Technology and Rzeszów University of Technology.

–There are only a few similar bridges in the world. We constructed a composite bridge on the fundament of Polish thought, developing a new technology. Support from the scientific institutions played the major part in the process. Together we have realized project which can be encountered as one of the milestones of Polish bridge construction. I have mentioned many times already that innovations are company’s DNA and for our innovativeness we were awarded. For Mostostal it is also the return to the roots. In 1929, the company of engineer Rudzki, which is predecessor of Mostostal, created the first welded bridge in Łowicz. The history has made a circle with the construction of the first Polish composite bridge by Mostostal Warszawa – commented Andrzej Goławski, President of the Management Board Mostostal Warszawa.

The technology of constructing bridges from FRP composite was elaborated by bringing together science and industry and showed satisfying results. The findings confirmed with laboratory tests were verified in the construction of the demonstrative bridge in Błażowa. Bridge beams were manufactured in the composite workshop of the company in Warsaw. It is worth highlighting that the company received first offers, both from the country and abroad and thus this technology shows a potential for export.

– Our new type bridge beam was not created for only one project. Both laboratory tests and the monitoring results of a newly built structure have evidenced positive results. At the moment is being prepared a catalog of composite beams which will contribute to fine designs of bridge constructions featuring various parameters – added Juliusz Żach, Head of Research and Development Department.

Mostostal Warszawa has been actively participating in research and supporting the innovations in the construction industry for many years. Research and Development Department composed of over a dozen of engineers forms part of the company for over the decade. The company invests in new technologies and thus contributes to the development of Polish engineering thought. At this point, no general contractor in Poland cannot yet match. Innovative activities of the company have borne many fruits and one of the examples is the many-time awarded composite bridge. Let us remind that bridge in Błażowa has been recently awarded by the ARP with the title Product of the Year 2016. It is also nominated for the PARP’s award - Polish Product of the Future. The gala will be held on 30 November 2016.

We encourage you to catch up with the footage showing how was created composite bridge in Błażowa. Visit our Youtube channel!