Mostostal Warszawa with state distinction in the field of energy engineering 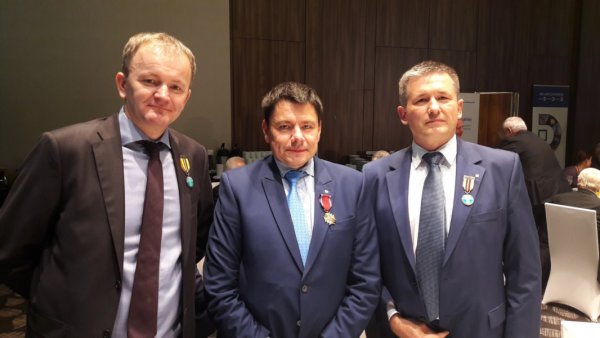 A Cross of Merit and two awards of Distinguished for Power Engineering – those three merits were received by employees of Mostostal Warszawa in consideration for unique achievements during their professional work in the field of energy engineering. The formal presentation of honorary awards topped the 25th anniversary of the Polish Economic Chamber of Power Engineering and Environment Protection.

Mostostal Warszawa has been related to energy engineering for decades. At the turn of the years, the company executed orders for major power producers, permanently building the national achievements in one of the key branches of the economy. The list of completed projects comprises several facilities, in which solutions were applied that were innovative for the period and also in the scale of the whole country. The contribution of the company to the development of the Polish energy engineering also comprises modernisation and assembly work for the major energy generators, such as for example ZE PAK S.A., Power Plants in Kozienice, Opole, Turów, and heat and power plants in Trzebinia, Katowice or Gliwice.

This year Mostostal Warszawa has been particularly distinguished for its merits for Polish power engineering, as three of its long-term employees have been honoured by high state medals for exceptional achievements and contribution in the development of Polish energy engineering.

The Bronze Cross of Merit of the President of the Republic of Poland was awarded to Paweł Żbikowski, Director of Power Engineering and Industry of Mostostal Warszawa. On the other hand, Jarosław Żemła, Director of Installation and Commissioning and Waldemar Borowiecki, Deputy Project Director for Production Preparation have been distinguished by the Minister of Energy by the honorary distinction of “Merits for Power Engineering”. The distinctions were handed out during celebrations of the 25th anniversary of the Economic Chamber of Power Engineering and Environment Protection at the presence of partners to the celebration, which comprised among others representatives of Polska Grupa Energetyczna, as well as Grupa Enea, Tauron, or Energa.

“We are very pleased that the professionalism of our employees has gained appreciation on a public forum. I consider it to be a great honour for the entire enterprise that professionally experienced employees of Mostostal Warszawa have been distinguished by high-rank state distinctions. Paweł, Jarosław and Waldemar are working each day at highly complex technically construction of new power units in the Opole Power Plant. At this occasion I would like to express my congratulations not only to the distinguished persons but also the entire management crew of the site in Opole” – said Andrzej Goławski, Board President of Mostostal Warszawa.

The Cross of Merit was established in 1923 and is being awarded by the President of the Republic of Poland to persons who have particularly served the state and the citizens, among others by performing activities encroaching far beyond the scope of their usual tasks or by dedicated public activity.