Mostostal Warszawa with a recognition from Marshal of the Mazowieckie Voivodeship 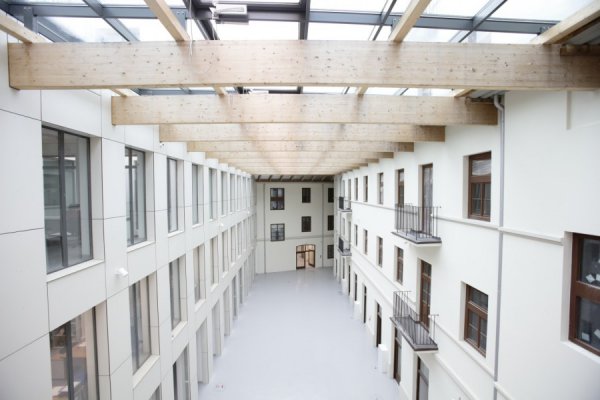 Mostostal Warszawa was awarded a certificate of recognition from Adam Struzik, Marshal of the Mazowieckie Voivodeship, for co-creating Warsaw Space of Technology. The distinctions were given in the Marshal Office.

Adam Struzik, Marshal of the Mazowieckie Voivodeship, invited to the Marshal Office at Jagiellońska Street a group of persons who contributed to the modernisation of the facilities recognized in the XXI edition of the Modernisation of the Year. Centre of Creativity Targowa, revitalised and adapted to the modern standards by Mostostal Warszawa, was among the laureates of this competition this year. Andrzej Goławski, President of the Management Board of Mostostal Warszawa, attended the meeting at the invitation of the Marshal and collected the certificate of recognition for a diligent work, commitment and all the efforts invested by the company in building Warsaw Space of Technology - Centre of Creativity Targowa at Targowa 56 in Warsaw.

Centre of Creativity Targowa is localised at Praga Północ district in the revitalised building of the former Minter’s tenement house from XIX century. The project was carried out by the Central Branch of Mostostal Warszawa between years 2013-2016 and represents a great architectonical value. It is localised close to the old marketplace – Różycki and Museum of Warsaw Praga, also modernised by the company. The Centre of Creativity Targowa is one of the facilities which form part of Warsaw Space of Technology.

The Centre is aimed at creating a space for the development of the companies from creative industry (a space for rent is available on preferential terms within the incubator). It was created for young entrepreneurs that have just set up their own businesses and those state-own companies that operate no longer than 3 years on the market. So far, the Centre has become an incubator of entrepreneurship and provided a proper infrastructure and support for promotion and assistance for 18 companies.