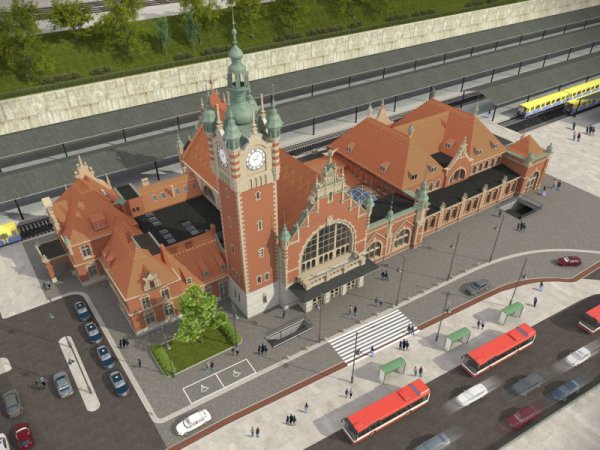 On 27 August 2019 Mostostal Warszawa SA and Polskie Koleje Państwowe SA concluded a contract for the reconstruction of the Gdańsk Główny railway station. The contract value is PLN 99.6 million gross.

- Modernization of the Gdańsk Główny station is the largest implementation project under the Station Investments Scheme. Investments of PKP S.A. and PLK in Gdańsk are an good example of funds usage to increase the comfort of passengers using both the railway station and the Gdańsk Główny station. I am convinced that both modernizations will improve the travel quality and encourage more frequent rail services usage - says Andrzej Adamczyk, Minister of Infrastructure.

The investment, which will be executed by Mostostal Warszawa, includes the reconstruction of the building of the Gdańsk Główny railway station at Podwale Grodzkie 2 street. The building was put opened in 1900 and has since remained in good technical and aesthetic condition until recently. The destruction of the Second World War, post-war fire and subsequent modernizations did not significantly affect the historic value and the overall appearance of the building. The station is entered in the register of monuments, and is located within the urban layout of the historic city of Gdańsk and within the archaeological site of the medieval Gdańsk’s Old Town.

- The contract that has just been signed for the reconstruction of the historic Gdańsk Główny Railway Station confirms the position of Mostostal Warszawa as the key general contractor for comprehensive and unique investments in the general construction area. Gdańsk Główny will be the third station after successfully executed  projects in Gdynia and Krakow, the modernization will be carried out by our company - says Jorge Calabuig Ferre, Vice President of the Management Board of Mostostal Warszawa.

The reconstruction of the station is aimed at restoring the original condition of the building, i.e. the architectural form of the facade and roof, renovating the steel window frames located in the hall together with the glass filling in the form of stained glass, restoring the historical layout of parts of the facilities as well the passenger hall colours restoration In addition to the reconstruction and renovation of the main station building, there are also plans to rebuild and expand the communication part connecting the station with existing urban tunnels and platforms.