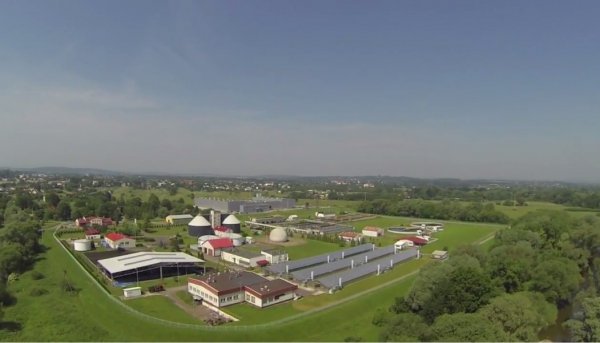 Mostostal Warszawa won the tender for extension and reconstruction of the sewage treatment plant in Krosno at Drzymały Street. The agreement with the Miejskie Przedsiębiorstwo Gospodarki Komunalnej w Krośnie (MPGK) for the realisation of the task worth PLN 32.1 million gross has been signed today.

The agreement was officially signed at the headquarters of the Miejskie Przedsiębiorstwo Gospodarki Komunalnej in Krosno in the presence of media, representatives of the investor notably with President of Krosno Piotr Przytocki. Andrzej Goławski, President of the Management Board and Darek Jarek, Director of General Construction, Industry and Environmental Protection from Mostostal Warszawa and Janusz Fic, President of the MPGK with Zdzisław Syzdek, Member of the Board and CFO of the MPGK Krosno representing the ordering party have signed the agreement.

The modernisation includes sewage, biological part, sediment part and part of land development. What is more, construction works will be executed on the fully operating facility in order to not interrupt its work. In the scope of the contract, Mostostal Warszawa is to reconstruct the sewage treatment plant (mainly biological part). New elements and buildings are to be erected, such as biological reactor, secondary settling tank, thickeners, step screens and water storage reservoir. The project is aimed at air-tight sealing in order to mitigate odour nuisance from sewage treatment in the surrounding areas.

'Modernisation of the sewage treatment plant is another project in the city executed by Mostostal Warszawa. For the MGPK we modernised Water Treatment Plant Sieniawa a few years back. We also extended the municipal waste utilisation plant and prepared for investment an area covering 38 ha and surrounding the southern border of the airport in Krosno. Now, we are going to be the general contractor for another ecological project in the region. It feels good to be back in Krosno. This is one of those places with which we are connected through cooperation', underlined president Goławski.

Sewage treatment plant in Krosno with three water treatment plants (Iskrzynia, Sieniawa, Szczepańcowa) form part of the local Water and Sewage Treatment Company. It is also the biggest and the oldest of the given facilities. The origins of the sewage treatment plant in Krosno dates back to sixties. Nevertheless, the plant has undergone several renovations so far which e.g. allowed to increase its capacity to 35 410 m3/d, the modernisation is necessary to improve its effectiveness and minimise the negative impact on the environment. Nowadays, the plant is collecting sewage from Krosno and eight adjoining communities. In total, it receives 21.000 m3 of waste per day that is 7.6 million m3 of waste per year.

'Care for the environment is one of the key values of our company. For this reason, we’re strived to intensify activities in the field of eco-friendly construction. The project that we are to deliver in Krosno, as well as the recently signed contract for the modernisation of the sewage treatment plant in Otwock, will positively affect its technological efficiency and processes and will also be beneficial to the environment and further development of afore mentioned facilities. The local community will also benefit from this improvements', reminded Darek Jarek, Director of General Construction, Industry and Environmental Protection.

Task under title: Extension and reconstruction of the sewage treatment plant in Krosno, Drzymały Street will be executed by Southern Division headed by Janusz Stanaszek and forms part of the project aimed at regulating water and sewage management of the city.