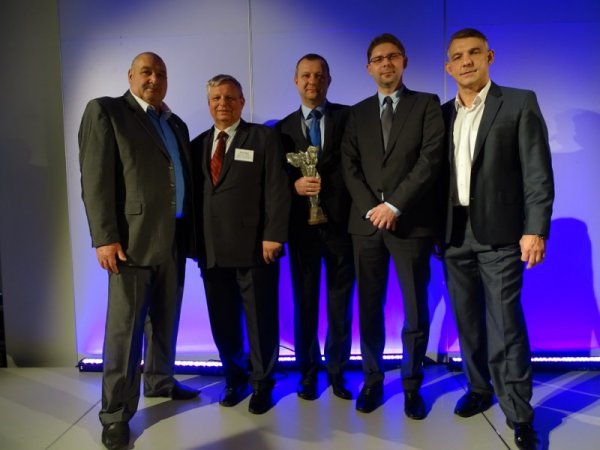 Mostostal Warszawa received the title and the silver statuette of the Bulider of Polish Sports in the XVI edition of competition organised by The Sports Poland Club. This distinction is awarded for particular achievements in the field of sports construction.

The Sports Club Poland organises The Builder of Polish Sports for the sixteenth time. In this competition, companys, communes and districts the most dedicated and vigorously operating for development of sports and recreational infrastructure are rewarded. In this year’s edition Mostostal Warszawa was distincted for its contribution to the construction of sports and recreation facilities in Poland, in particular for those the most important in the world of Polish sport facilities; that is TAURON ARENA in Cracow and Municipial Stadium in Tychy among others.

As organizers indicated, Mostostal Warszawa was appreciated for reliable performance and courage in realizing complex contracts in Polish market of sports and leisure investments. For building modern infrastructure, numerous realizations important for regions, impact on the development of modern and safe facilities that give oppportunity to general development of sports and recreation for children, youth and local communities.

For several years among sports and leisure facilities nominated by voivodeship marshalls are those realized by Mostostal Warszawa: sports and entertaintment halls in Łódź and Kraków, sports and recreation centre with olympic swimming pool in Olsztyn, University Sports Centre in Toruń, sports and cultural centre with sports hall and swimming pool in Olecko or municipial sports hall in Moszczenica and many others – said during the awards ceremony Danuta Burzyńska, editor in-chief of Builder magazine, the patron of the competition.