Mostostal Warszawa once again among Creators of Construction 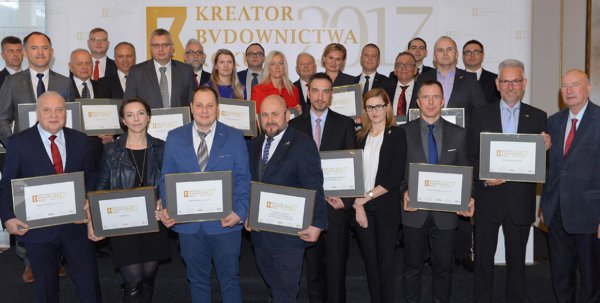 For the fourth time, Mostostal Warszawa has been rewarded with the title Creator of Construction. This distinction is given by the Publishing House of the Polish Chamber of Civil Engineers to persons and companies with a passion of creation, a power to shape the construction market and that stand out in the industry. Agata Falęcka, spokesperson of Mostostal Warszawa collected the award for the overall activities of the company, including research and development in the area of new technologies.

The project Creator of Construction is organised since 2011 under the patronage of the Polish Chamber of Civil Engineers. It is aimed at rewarding persons and companies that positively influence the development of construction, new technologies, solutions and quality of performance. The project was also created to recognize the active attitude towards social responsibility. Among the winners are for example the persons from managing bodies, manufacturers of construction materials, architectonical studios, advisory agencies, investors, developers and general contractors.

Mostostal Warszawa received two certificates Creator of Construction - for the company and President of the Management Board Andrzej Goławski. The Polish Chamber of Civil Engineers awarded certificates for innovative activities focused on new construction materials, energy efficiency, sustainable construction and new information and communication technologies supporting production process including BIM technology. The company established Department of Research and Development, a unity that helps to combine business and scientific priorities. Mostostal Warszawa is also co-founder of the buildingSMART Poland Foundation – non-profit organization which sets up directions for digitization of the construction.

The company’s portfolio includes many important projects, e.g. construction of power units no. 5 and 6 in Opole Power Plant, which is the largest infrastructure project in Poland after 1989, Aquapark in Tychy, which is to be the most modern facility of its kind in Europe, construction of Strzyżów bypass within the regional road no. 988, construction of Stalowa Wola and Nisko bypass along the national road no. 77 and prefabrication of reinforced-concrete segments weighing 50 000 tonnes in total with use of new technologies that will be used in the construction of Danish bridge forming part of the Frederikssund ring road.

‘In the name of President Goławski and all employees of Mostostal Warszawa I’d like to thank you for this prize – said Agata Falęcka, spokesperson of the company during awarding ceremony. The title of Creator of Construction which we’ve received for the fourth time in a row is a great recognition for the company and for all people working in Mostostal Warszawa. This is a clear indication that our activities are visible and appreciated in the industry circles. We’re pleased that an increasing number of initiatives that we’re involved in is being disseminated in the sector and influences positively its development. Each award like this is for us a source of motivation to work harder' – she added.