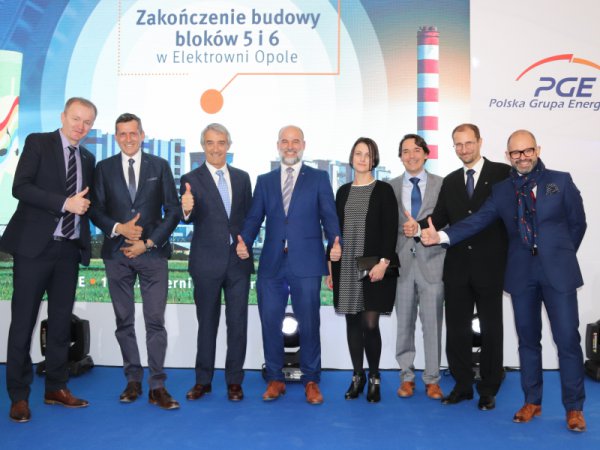 On 10 October at the Opole Power Plant, owned by PGE Górnictwo i Energetyka Konwencjonalna member of the PGE Group, the ceremony concluding the construction took place for two ultra-modern power units No. 5 and 6 with a total output capacity of 1,800 MW. Thanks to the investment worth nearly PLN 11.6 billion, Opole Power Plant is currently at the forefront of the most modern power plants in the world and satisfies 8 percent of the domestic electricity demand. The energy produced from power units will be able to power up to 4 million households. The investment was carried out by a consortium consisting of: Mostostal Warszawa, Rafako, Polimex-Mostostal and GE Power.

On 30 September, in accordance with the schedule, one of PGE's most important investments was completed - the construction of power units No. 5 and 6 at Opole Power Plant. Thanks to the latest technologies, the efficiency of electricity generated in new units is at the level of about 46 percent, which will translate into a significant reduction of the power plant's environmental footprint. The new energy blocks are low-emission and with greater capacity in order to meet the stringent environmental standards of the European Union. For every kilowatt hour of electricity produced in Opole blocks, two to four times less sulfur and nitrogen oxides will be generated, and the emissions of carbon dioxide will be lower by 25%.

- New units at Opole Power Plant, will be ultimately capable to generate up to 12.5 TWh of electricity per annum, thus significantly strengthening Poland's energy security. Moreover, modern technologies used in their construction make it one of the most advanced conventional power plants in the world. The investment is also part of the development of the energy sector, which was set in the draft Poland’s Energy Policy of until 2040 - says Krzysztof Tchórzewski, Minister of Energy.

Blocks 5 and 6, after successfully completed synchronization, have undergone the process of adjusting and optimization of technological systems. Before commissioning the units, the block was optimized, acceptance tests, warranty measurements and a 30-day uninterrupted work tests.

- We are witnessing a historic moment, not only on the scale of the PGE Group or even the Polish energy sector, but the entire Polish economy - today we are officially finalizing the construction of blocks 5 and 6 at the Opole Power Plant, i.e. the largest infrastructure investment in Poland implemented since 1989. Modern power technology, meets the highest available standards of efficiency and environmental friendliness, power units. The new blocks are an important element of the Polish transformation that combines the latest conventional energy solutions with the development of renewable energy sources. Only these two blocks are able to supply up to 4 million households with electricity - says Henryk Baranowski, president of the board of PGE Polska Grupa Energetyczna.

- The expansion of the Opole Power Plant not only strengthened the position of the PGE Group as a leader in the energy sector in Poland, but also contributed to the Polish economy. As much as 70 percent the value of all orders for the construction site went to Polish companies, and out of every PLN 1 zlotys we spend, the money was retained in the country. The investment also means thousands of jobs - at some moments, even 5.5 thousand worked at the construction site per day. People working at the site have worked a total of 32 million man-hours - adds Norbert Grudzień, vice president of PGE GiEK for investment and asset management.

The Opole megainvestment was carried out in the EPC formula (engineering, procurement, construction), i.e. it included the design, delivery and construction of turnkey power units. Each block will work as a monoblock system (one boiler with one turbine set). Thanks to the compact and modular design, the new blocks, together with the infrastructure, occupy a relatively small space of about 45 ha. Next to the generating units, two cooling towers with height of 185.1 m each were built, in which the first note bars from the traditional song "Poszła Karolinka do Gogolina" were painted in honor of the Opole Song Festival. The new blocks have been designed for 35 years of work span and power usage up to 8000 hours / year. They were also adapted for the generation of cogeneration heat in at alevel of 300 MWt / h

- Blocks 5 and 6 were a special task for us. We were aware of the strategic significance of this investment, but also its unique character in terms of construction. The project required an unusual work pace of, especially during assembly and construction of the boiler room. Today we can say: together we have achieveda success - we have completed an important however, extremely difficult task - says Jorge Calabuig Ferre, Vice President of the Management Board of Mostostal Warszawa. - Power blocks in Opole are one of the most important investments that Mostostal Warszawa implemented in its 75-year history. This project gave us a unique experience.

The construction of Opole Power Plant power units was a huge challenge not only technical terms, but also design, logistics and coordination. The scale of the project is illustrated by the number of regulations and standards used for the construction. We are talking about 2.4 thous. applicable legal standards, based on which the contractors carried out their work. The number of steel structures and concrete used for construction is also impressive. It can be compared to the structure of the New York Empire State Building (65,000 tons), and concrete would be enough to erect a second Pentagon (250,000 tons).

As many as 54,000 people were involved in the entire construction cycle of new power units at Opole Power Plant.. and carried out a total of nearly 40 thousand collections, including 29 thousand in the construction industry, 8,000 in the technology industry and approx. 2,000 during works related to the start-up of new units. All as-built documentation is collected in approx. 18 thousand binders.