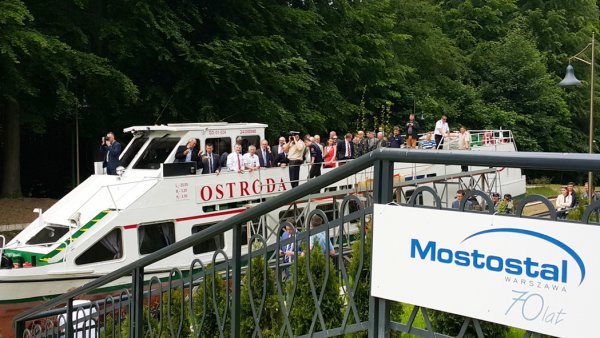 Mostostal Warszawa has finished a world's unique facility: Elbląg Canal. This inland waterway connecting Elbląg with, inter alia, Iława and Ostróda had been build about 150 years ago. On Sunday, May 30, shipping services encompassing the entire length of the canal have been restored.

Mostostal Warszawa has finished a world's unique facility: Elbląg Canal. This inland waterway connecting Elbląg with, inter alia, Iława and Ostróda had been build about 150 years ago. On Sunday, May 30, shipping services encompassing the entire length of the canal have been restored.

A Historic Monument, one of Seven Wonders of Poland, a hydraulic engineering facility unique on the global scale - these are just a few definitions for the Elbląg Canal commissioned by Mostostal on May 29. The project's was funded by the Regional Water Management Authority in Gdańsk which had outsourced to Mostostal Warszawa the revitalization of the Elbląg Canal within its Buczyniec Sluice and Całuny Slipway section. The contract covered the overhaul of five historic slipways and architectural / construction, hydraulic engineering, and mechanical / technological works.

The Elbląg Canal is an exceptional facility. With its hydraulic devices originating in the 60. of the 19th century, it is considered a unique structure on the global scale. The water level difference over this 9,6-kilometer long route is over 100 meters. A ship overcomes this difference with the help of water-powered slipways. The project, under completion by the Northern Division of Mostostal Warszawa, is located in the Elbląg Districti of the Warmia-Masuria Province and extends through the territory of the Rychliki, Pasłęk, and Elbląg communes.

The revitalized slipway sections of the Elbląg Canal between Buczyniec Sluice Gates and Całuny Slipway are located on the Miłomłyn – Drużno Lake sailing route. The project comprises the Elbląg Canal Protected Landscape Area and is located in the vicinity of the Drużno Lake Natura 2000 Area and Drużno Lake Nature Reserve. Under the regulation of the President of the Republic of Poland of January 14, 2011, the Elbląg Canal was recognized as a Historic Monument - a relic of hydraulic engineering concept of global importance.

"Supervising the renovation of the Elbląg Canal was quite a challenge for me. It's the only structure of this type in Poland and probably across Europe. The slipways (Buczyniec, Kąty, Oleśnica, Jelenie, and Całuny) comprise five similar structures, a few building permits within a single project. The project covered all the industries, starting with ground works, concrete reinforcement and railway works, hydraulic engineering, reinforcements, engineering, power, sanitary, road works, mechanics and maintenance. The scope of works included renovation of the Water Management Station building, engine room, welfare facilities, and a new Historical Chamber of the Elbląg Canal.
Without a team of experts we had managed to create, none of this would have been possible. Taking this opportunity, we would like to extend our sincere thanks to: Jan Wilczak; Mateusz Mikołajczyk; Sylwia Kołodziejczyk; Jacek Marchewka; Dariusz Zduńczyk; Marek Danielewicz, and Andrzej Jędrzejewski. I would like to thank the following heads for placing their trust in us and for entrusting this task to me: Alojzy Malczak and Maciej Sasak,” – said Paweł Półtorak, Contract Manager at Mostostal Warszawa. Happy Boating to all Elbląg Canal users!