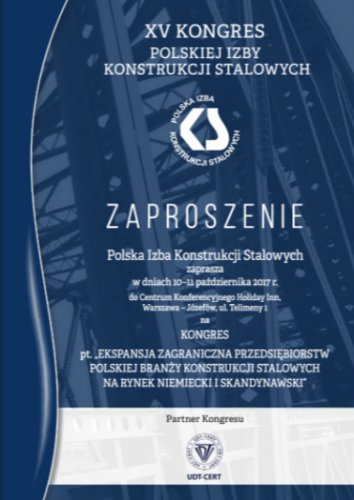 The 15th Congress of the Polish Chamber of Steelworks titled ‘Expansion of Polish steelwork enterprises onto Scandinavian and German markets’ will be held on October, 10-11 in Conference Hall Holiday Inn in Józefów near Warsaw. The UDT CERT, a certification body of Office of Technical Inspection operating according to the European standards, is the partner of the Congress. Mostostal Warszawa as the long-standing founding member of the Chamber has become one of the sponsors of this event.

Expansion of Polish enterprises from the steel industry onto foreign markets, opportunities and risks that Polish entrepreneurs have to face in the German-speaking region, are going to be the main topic of considerations during the 15th Congress of the Polish Chamber of Steelworks. There are planned two discussions in which will be participating representatives of the member companies of the Chamber. Attendees from national and international economic organizations will discuss specifics of the Scandinavian and German markets, including e.g. cultural differences that often interfere in establishing international business cooperation. Another important issue to be considered by the participants will be mitigation of financial risks in regard to foreign activities. During the Congress, professor Dariusz Rosati, a former ministry of foreign affairs (1995-1997) and the current member of the European Parliament is going to give a lecture. The ceremonial gala will be the final event of the Congress. Certificates for steel structures manufacturers and co-manufacturers will be given and extended.

In regard to international projects, let us remind that the Mostostal Warszawa Capital Group possesses experience in cooperation with foreign investors. At this point, Mostostal Warszawa is the major supplier of prefabricated elements for the construction of the Danish bridge in the Roskilde fjord. In the past, the Company became known as the builder of the steel structure of the Commerzbank Tower in Frankfurt, the tallest building in Europe at that time. It is worth highlighting a subsidiary of the Mostostal Warszawa Capital Group – Mostostal Kielce specializes in manufacturing and assembly of steel structures.

The Polish Chamber of Steelworks is a self-regulatory organization established in June 1996. The chamber associates about 150 companies, including steel structure manufacturers and assembly companies, companies cooperating in production and distribution of steel, scientific, research, design and specialist entities. Mostostal Warszawa is one of the founding members of the Chamber.