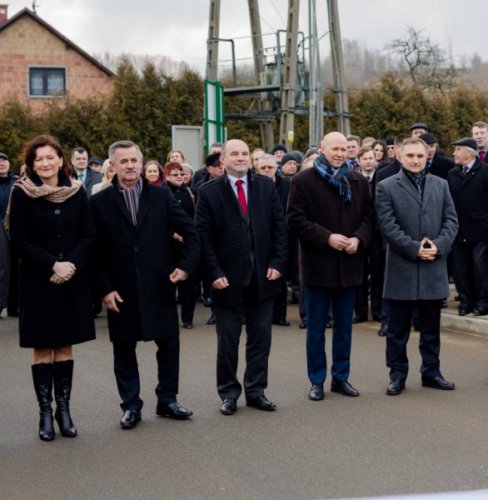 Industry in tandem with science? We prove that this kind of cooperation is paving the way for innovations. Many years’ experience, creative potential and innovative way of thinking about construction led experts of Mostostal Warszawa and resulted in the creation of the first Polish road bridge of FRP composites. On Tuesday (9th February) in subcarpathian town Błażowa we officially took first steps on the bridge of the future.

Bridge in Błażowa is one of the few in Europe and the biggest in the world, considering span length, innovative road bridge made of composite materials. The task was accomplished as a part of the research project Com-bridge. Consortium under direction of Mostostal Warszawa with participation of Promost Consulting (design office from Rzeszów), Rzeszow University of Technology and Warsaw University of Technology  was responsible  for the realization of the project. The construction of the bridge was co-financed  from the funds of Demonstrator + programme  carried out by National Centre of Research and Development. For the bridge construction were used materials commonly used in aerospace, automotive and sports industries (e.g. Formula 1 cars). Glass and carbon fibres allowed to create lightweight, high-strength and corrosion resistant structure. The first  Polish road bridge made of FRP composites set a world record in span length. Its construction was possible thanks to the cooperation between industry and science headed  under direction of Mostostal Warszawa.

Mostostal Warszawa – Engineers of the Future

Mostostal Warszawa for many years has been a pioneer in the field of introducing innovations in construction industry. Over ten years ago the Company, as the only one in the construction sector in Poland, established own Department of Research and Development. Nowadays, the unit employs several specialists of a different profile: civil engineering, sanitary engineering, electronics and material sciences. They cooperate with almost every important research organization in the country and abroad. Supporting new technologies, the company is investing not only in own development but, what is more important, also contributes to development of Polish engineering thought. Activity in the R[&]D area and commitment in the scientific research field ended with many successes. The work of group of experts of Mostostal Warszawa resulted in, among others, construction of the first road bridge of FRP composites realized in the framework of the Com-bridge project.

- I am looking with pride at the first road bridge of FRP composite, because I am aware how much work our engineers put in its creation. Over 70 years of business on Polish market we proved that innovations are integral part of Mostostal Warszawa’s DNA. We could say that bridge near Rzeszów, which we are commissioning now, is a symbolic closure for 70th anniversary of the company. Notice that the history of Mostostal Warszawa starts with reconstruction of the Poniatowski Bridge in Warsaw. Still, the Company derives from achievements, technical thought and experience of an enterprise that operated long before. We continue up to this day what had started Towarzystwo Przemysłu Metalowego Konstanty Rudzki i Spółka, cradle of contemporary Mostostal Warszawa. In 1929 we  constructed  the first welded road bridge near Łowicz and now the  first Polish innovative road bridge of composites near Rzeszów. We are always a step ahead, because we build with passion – said Andrzej Goławski, President of the Board Mostostal Warszawa.

Beam as a measure of success

Material used to prefabricate bridge beams is made of a polymer matrix reinforced with fibres, simply called FRP composite (fibre-reinforced polymer). By reinforcement of the matrix with glass and carbon fibres emerged material with new parameters, which were not direct outcome of structural elements properties. An important feature of FRP composite, that particularly drove attention of bridge engineers, is its greater durability in comparison to the materials traditionally used in construction. The FRP composite neither corrodes as steel nor errodes as concrete. Moreover, its low density and high-strength allowed prefabricating big structural elements and its assembly was fast and possible with lower load-capacity of the equipment than in case of assembly of traditional prefabricates.