Mostostal Warszawa about the experience in construction of bridges of composites 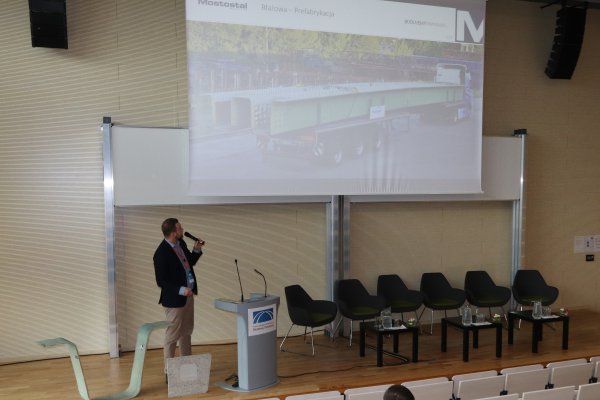 On March 4, Lech Własak from the Research and Development Department in Mostostal Warszawa took part in the Bridge and Tunnel Infrastructure Facilities Forum, during which he told about the company's experience in building bridges from FRP composites.

- Mostostal Warszawa has gained unique experience on the use of innovative technologies on its construction sites. Our projects, including patented construction of bridges made of FRP composites put us among the leaders of modern construction in Poland - says Lech Własak.

The growing importance of composites

A polymer matrix fibre material called FRP (fibre-reinforced polymer) has long been used in the aerospace and automotive industries due to features such as lightness, durability, strength and corrosion resistance. The use of composites in construction has also been increasing since the 1990s. In the world, this material is successfully used for the production of load-bearing components, such as concrete reinforcement, lattice profiles, as well as girders and load-bearing plates used e.g. in bridge engineering.

Mostostal Warszawa has been awarded many times in the industry forum for the construction of an innovative bridge made of FRP composites in Błażowa, including the main prize in the 19th edition of the Polish Product of the Future competition, the main prize in the Maksymilian Wolff bridge competition, a special prize of the Industrial Development Agency in the Good Design 2016 competition. As part of the Com-bridge project, a second composite bridge was also built in Nowa Wieś, the ceremonial opening of which took place in 2017.

Innovation in business is one of the key values of Mostostal Warszawa, which was the first company in the entire construction industry in Poland to set up its own Research and Development Department, which develops new products and technologies to strengthen the Company's competitive advantage. Mostostal Warszawa, by supporting this activity, invests not only in the development of the company, but more importantly in the development of Polish engineering thought. The Research and Development Department in its several years of history cooperated with almost all major research units in Poland and many abroad. Currently, the main area of work is the use of FRP composites in the bridge industry. Click to learn more about research and development activities at Mostostal Warszawa.

The Forum of Bridge and Tunnel Infrastructure Facilities is a platform for the exchange of knowledge on the specifics of building key elements of road and rail infrastructure such as bridges, viaducts, tunnels. The conference, organized by the TOR Economic Advisory Team, was attended by experts representing scientific institutions, industry associations and the largest contractors in the infrastructure industry, discuss issues related to current regulations and technologies used in the construction of bridge and tunnel structures.