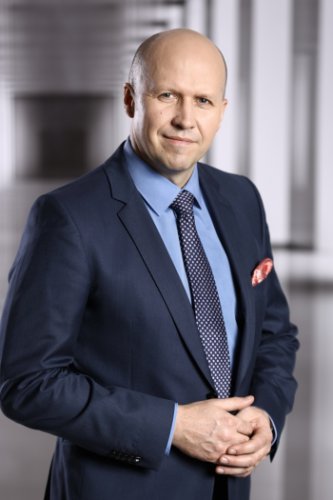 Mostostal Warszawa Group continues to improve its financial performance, a rising trend initiated in 2014, and ended the year with net profit of PLN 32 mln. We achieved consolidated sale revenue in the amount of PLN 1.28 billion, an increase of 5% compared to 2014 (excluding revenues from the sale of subsidiaries in 2014). EBITDA amounted to PLN 123 mln and accounted for 9,6% of the total revenue, while profit before tax amounted to PLN 41 mln (to compare: gross profit in 2014 amounted to PLN 4 mln).

Effective measures taken by Mostostal Warszawa and its subsidiaries also contributed to the further improvement of our cash position, through the development of positive cash flow from operations, which exceeded by PLN 138 mln the amount of financial debt of the Group. As at 31 December 2015 Mostostal Warszawa Group had PLN 352 mln in cash and cash equivalents and financial debt (taking into account leasing) amounted to PLN 214 mln.

Our financial debt profile is very favorable, since bank loans and leasing amount only to PLN 9 mln (23 mln PLN as at 31 December 2014). Also, in comparison with December 2014, we have reduced our corporate debt to Acciona Infraestructuras SA by 24 mln PLN and now it amounts to PLN 205 mln.

Mostostal Warszawa, having the confidence of its strategic investor – Acciona, for whom Poland remains an important market, gains also a natural part of strategic advantage against the industry, and its substantive and capital support allows us to be optimistic about the future.

As of today, the terms of repayment of our loan to Acciona Infraestrucrueas SA have been extended (PLN 67 mln is due for repayment in 2016 and PLN 138 mln in 2017). This will allow us to use them effectively as an additional way of Mostostal Warszawa’s development.

We recorded a PLN 150 mln increase in cash, primarily on the Group's operations (PLN 194 mln) and to a lesser extent, in sale and purchase of fixed assets (PLN 8 mln). That allowed us to reduce financial debt by PLN 52 mln.

Mostostal Warszawa Group's order backlog amounted to PLN 2,2 billion at the end of December 2015 and the biggest part constituted contracts in the energy sector.

This is due to the fact that Mostostal Warszawa Group focuses most of its resources on the realization of one of the largest industrial investment in Poland after 1989 and one of the largest investments in Europe, that is on the construction of new power units no. 5 and 6 in Opole Power Plant. The works in Opole are proceeding according to the established schedule, and are 30% complete. The remaining part of the Group's portfolio is filled with contracts in general and environmental protection construction.

In connection with the improvement of financial results, Mostostal Warszawa Group also expanded cooperation with financial institutions to increase lines of credit and guarantee, enabling us to acquire new contracts in the general, infrastructure, energy and environmental protection construction. Since early 2015 we have increased the guarantee lines for construction contracts by PLN 233 mln. Also within the last year the share price of Mostostal Warszawa increased by over 138%.

On March 8th, 2016, the Supervisory Board approved the financial results for the year 2015 and recommended that the net profit be allocated to cover losses from previous years.

Based on analysis of cash flows, as well as the structure of the portfolio of orders, including significant involvement in the energy sector, I estimate that the year 2016 will be a year of continuation of the positive economic results of the Mostostal Warszawa Group.