Modernisation of the Year 2016: let's vote for Centre of Creativity Targowa! 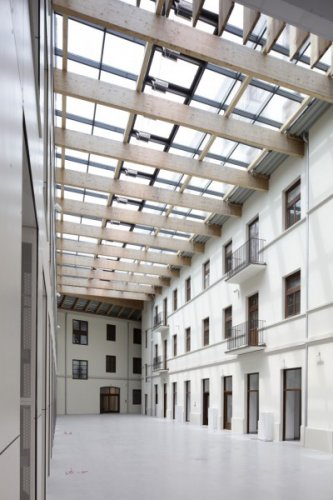 Modernisation of the Year 2016 is a prestigious competition held under auspices of Ministry of Infrastructure and Construction. Centre of Creativity Targowa which was constructed by Mostostal Warszawa fights for the main prize of the jury. The competition is accompanied with online voting in which Internet users can choose the best modernisations in Poland.

The results of the XXI edition of the Modernisation of the Year will be revealed in August during a ceremony in the Royal Castle.  Last year, the Elbląg Canal modernised by Mostostal Warszawa reached the final of the competition. As before, regardless the jury’s verdict, Internet users can vote for the best modernisations and newly built facilities in Poland. The competition is accompanied with the Plebiscite Modernisation of the Year. In this online voting, in the category ‘historical buildings’, is nominated Centre of Creativity Targowa, situated next to the historical marketplace ‘Bazar Różyckiego’ at Warsaw Praga Północ district.

Mostostal Warszawa turned the ruined tenement houses into a modern centre for developing innovative ideas. The 3.200 sqm complex includes offices, conference rooms, exhibitions rooms and advisory desks. The construction works at Targowa 56 lasted two years and encompassed revitalisation of the existing front building together with northern outbuilding and the construction of the new tree-storey southern wing. The main building from the Targowa Street side with northern outbuilding are listed as historic buildings. For that reason, the scale of the renovation was huge and covered everything from the roof to basement. Mostostal Warszawa rebuilt the tenement house and adapted it for office and service functions. In the southern part of the complex where used to be two-storey building, new wing was constructed, one storey higher. All buildings are linked so it would be easier to pass from one to another. What’s more, the centre has an internal yard which is half-closed by a glass.

Centre of Creativity Targowa is one of the first projects commissioned by the Capital City Development Authority in the framework of the revival of the right bank of Vistula river.

You can vote for Centre of Creativity Targowa on the website of the competition Modernisation of the Year.

Meanwhile, we invite you to see the pictures of the Centre on Instagram of Mostostal Warszawa!