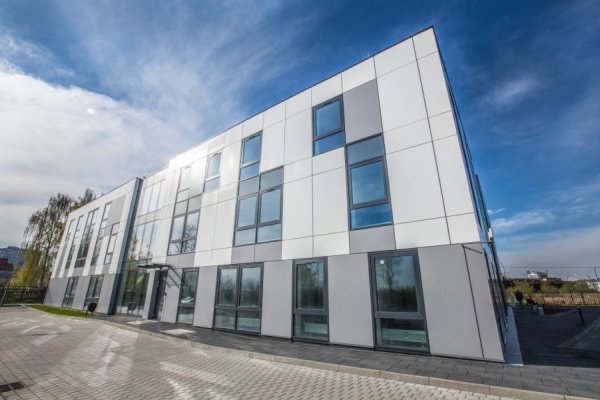 Mostostal Warszawa completed construction of the new police headquarters in Gdańsk.Units stationed so far at three different localisations will be transferred to the newly built facility, which is located at the corner of Wiesława and Zabłotna Street. Police officers will be provided modern and functional offices with garage facilities. The project value amounts to nearly PLN 26 million.

The project was executed on the request of Provincial Police Headquarters in Gdansk by Northern Division of Mostostal Warszawa headed by Maciej Sasak. New office facility comprises two buildings covering the area of 7.000 sqm. The main part of the station consists of four aboveground storeys. Due to difficult soil conditions and high level of the ground water, the building was reinforced with piles and columns. In addition, white box system was used for the development of underground structures. The building is equipped with audiovisual, videoconference services and city monitoring. Ultimately, there will be working 250 people. Right behind can be found a garage building which can accommodate heavy trucks and patrol boats. General works were preceded by the development of a detailed design and for this task, Mostostal Warszawa had 4 months commencing from the conclusion date o the agreement.

Official opening of the facility is planned between July and August this year. New building will hold a place for three police divisions and will contribute to the better communication between forces as well as to the time of reaction. As a result, police officers will be able to get quickly on the site. It will also positively affect level of safety in the city. What is more, new police headquarters is located near the canal of the Motława river. This, in turn, are good news for the water police division which will be also transferred to the new building. So far, this unit has been stationed in an old barrack. In the new localisation, police officers will have a straight access to the harbour and to water crafts berthed there. After moving to the new headquarters, a unit that has been functioning as water police department will be converted into the first water police station in the country.

We also invite you to visit Instagram of Mostostal Warszawa and to take a look at the photos taken by Marta Kąkolewska!