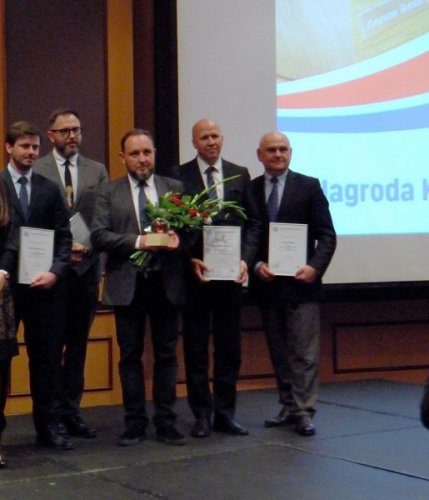 The Cristal Brussels prize for best and most active academic institutions and enterprises which are distinguished by their activity, is awarded to recognize the outstanding accomplishments of participants of EU programmes. In award gala which  was held July 2nd Cristal Brussels went to the five winners. In the prize-giving ceremony participated President Andrzej Goławski and Juliusz Żach, Head of the R[&]D Department. Jarosław Gowin, Ministry of Science and Higher Education was also present.

This year, the Cristal Brussel prize was awarded to the participants of the Horyzont 2020 Programme – the largest research and innovation programme in the history of the European Union, to which over EUR 77 million will be assigned between 2014 and 2020.  The prestigious competition was organised by the National Contact Point for the EU Framework Programmes. Mostostal Warszawa was granted nomination in the category “large enterprise”. The other nominees included: KGHM Polska Miedź S.A., Astri Polska Sp. z o.o., Nokia Solutions and Networks Sp. z o.o., Orange Polska SA. The prize-giving ceremony took place on 2 June. The event was attended by a numerous group of representatives of universities, academic institutions and companies nominated to the prize. The participants included President Andrzej Goławski and Juliusz Żach, Head of the R[&]D Department.

– We have been cultivating the tradition of scientific activity for a number of years in Mostostal Warszawa; our significant accomplishments in this area continue to grow. Innovation is our showpiece and it allows us to build our competitive edge; it constitutes our contribution to the development of the Polish engineering ideas. At the same time, as a result of many years of cooperation with foreign partners, Mostostal Warszawa has become a recognizable trademark on the international scene. The company is the industry leader, combining business priorities with academic objectives. The guarantee for our success is our Research and Development Division. We are honoured to be among the noble group of companies nominated to the award – said Andrzej Goławski, President of Mostostal Warszawa.

The Research and Development Division is a unique unit among companies in the construction sector. Its activity and involvement in implementation of scientific projects, combined with dynamic procurement of subsidies resulted in awarding the company with the “Kryształowa Brukselka” prize in 2013. To-date, the Division has completed over 30 research projects which were co-financed from the EU funds and from domestic support programmes. Now, Mostostal Warszawa is a participant of subsequent projects as part of the Horyzont 2020 programme, which is aimed at promoting development of science, as well as improving economic competitiveness of member states.

– Our activity in the area of innovations is mainly targeted at application of new construction materials, energy efficiency, sustainable construction, as well as supporting production processes with the use of modern communication and information technologies. We have received co-financing for five new programmes from the Horyzont 2020 programme. Three of them are already being implemented and they belong to initiatives that are technologically advanced, where we have the status of a partner. Two others will be launched in autumn. A very intense period, filled with interesting challenges, lies ahead of us– said Juliusz Żach, Head of R[&]D Department.

A conference entitled “Horyzont 2020: Where Are We and Where Are We Heading To? Opportunities and Challenges for Poland” took place on 3 June. The conference was co-organised by the Ministry of Science and Higher Education.

The originator of the idea for awarding Polish research units and companies for their scientific accomplishments as part of research and innovation programmes was Andrzej Siemaszko, Ph.D., head of the National Contact Point for the EU Research Programmes in years 1999 – 2014. Since the very beginning, the initiative has enjoyed positive reception and it constitutes a valued distinction among scientists and entrepreneurs. The “Kryształowa Brukselka” prize was awarded for the first time in 2001. In this year’s edition of the contest, the prizes were given out in five categories: universities, institutes, SMEs, large companies and the individual prize. Mostostal Warszawa was also a winner in the seventh edition of the contest in 2013.