Jordanki on the finishing straight 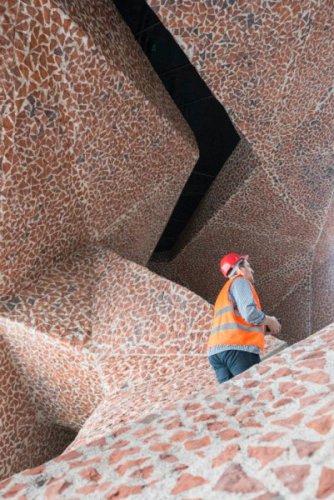 The concert hall in Jordanki, so awaited by the people of Torun, is already at the final stage. The work is 95% complete, and the general contractor Mostostal Warszawa is currently finishing work inside the building.

“Torun has waited decades for this type of project to be created. Many cities have beautiful halls designed for cultural events, and we in Torun have waited patiently, getting ready. Now we are at the final stage of construction. What you see is the end of long and painstaking work. But I hope that the Torun will be delighted with its concert and congress hall, a place where people will be coming for decades for interesting and important events,” said the president of Torun Michał Zaleski.

The laying of the picado flooring – the hardest and most time-consuming phase of construction – was completed in the summer. Currently, intensive cosmetic and impregnation work is going on inside the building on the pikado structure. The scaffolding has been removed, and heavy equipment is no longer on the site.

“The glazing of the windows has been completed, and the biggest transport and trap door is now working. Work is being carried out on four scene drops. The contractor has finished laying the parquet in the rehearsal room, conference rooms and offices, and has laid granite slabs on the square in front of the concert hall. They are currently being polished – only the concert hall remains to be done, “ lists Robert Kiezik, contract manager at Mostostal Warszawa.

Paving stones have been laid on the road between the Marshal's Office and the hall, and work is underway on installing handrails and railings on staircases, impregnating concrete walls and installing mobile dividing walls in concert halls. Work has begun on installing MLS acoustic cladding sheets and equipment for cloakrooms and toilets. Greenery is being planted in Jordanki and small architecture and outdoor lighting is being installed.

“Builders with pneumatic hammers have been replaced by numerous cleaning teams who are removing dust and dirt. In early October, a mobile auditorium together with seats, a stage and delicate controls will be installed. The building will be ready for final acceptance at the beginning of November,” adds the president of the Jordanki Congress and Cultural Centre Grzegorz Grabowski.

Open days at the beginning of December will allow the residents of Torun to see the finished interior of the Jordanki Culture and Congress Centre. The program of opening events will be diverse: on December 14 there will be a concert by Goran Bregović, followed the next day by the queen of British pop Lisa Stansfield, and on 16 December there will be an acoustic concert by HEY.