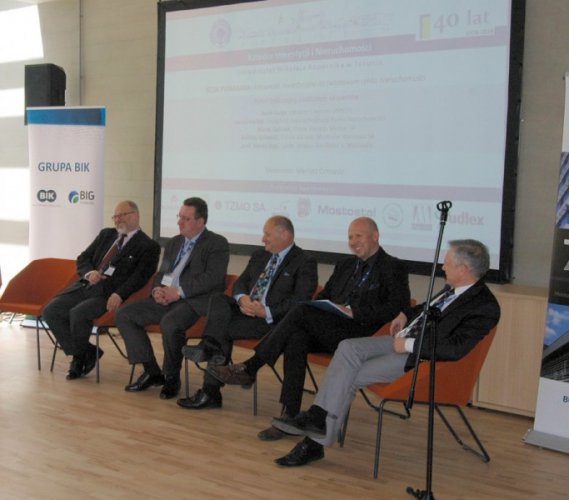 Guests of the debate organised by the Nicolaus Copernicus University in Toruń talked about status of the real estate market in Poland, possibilites for its development and risks included, also in the context of the foreign investors. The scientific conference on this matter was held in the brand new Cultural and Congress Hall in Jordanki which general constructor was Mostostal Warszawa. President Andrzej Goławski set out his opinion in the discussion of the experts.

It is always good to be back in Toruń. Mostostal Warszawa and the Toruń City have a long history. For many years our company with success has been cooperating with the Nicolaus Copernicus University in Toruń (UMK). We constructed teaching facilities such as Collegium Humanisticum and University Sports Centre for this university. Last year, in December, in the capital of the famous Polish gingerbread cookies was held a great opening of the modern concert hall CKK Jordanki. This is where on 10 and 11 May took place a scientific conference titled:  Investment and real estates in the world economy which was sponsored by Mostostal Warszawa. The meeting was organised by Department of Investment and Real Estates at the Faculty of Economic Sciences and Mangement at UMK. The Department is also celebrating its 40th anniversary.

The meeting brought together a group of representatives from world of science, goverment institutions and business. For the invitation of the host on the discussion panel of the experts took part Andrzej Goławski, President of Mostostal Warszawa. Leading one of the biggest construction companies in Poland, through an expert eye, he assessed risks which construction company is facing when buying a property for development or when acts as general constructor of such development in terms of local markets and other countries.

In a plenary sessions particpated representatives of Ministry of Development, Polish Information and Foreign Investment Agency, the Polish National Bank, and researchers from the biggest universities across the country. The main topics discussed during the conference were Polish and foreign investments, financing investment on the local real estate market and in other countries, capital flows, status of the construction company on the real estate market, investment risks and responsibility of the investors on a transnational basis. The event was held under the patronage of the Ministry of Infrastrucutre and Construction.

On the first day of the conference was planned a special surprise for the participants. Arkadiusz Biniek, Contract Manager at Mostostal Warszawa, who worked in the construction of the Toruń auditorium, knows the Jordanki Music Hall insideout. Telling about process of realization and revealing curiosities about, for example, interior’s acoustics, pikado, he showed the guests around at the most modern concert hall in Poland.