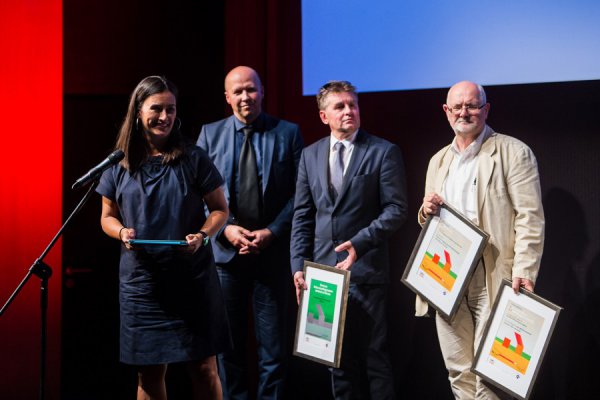 Built by Mostostal Warszawa, the Jordanki Cultural [&] Congress Center was amongst the Polityka Architectural Award 2015 finalists. This is yet another distinction awarded by architectural community for this building.

Polityka editors have awarded the Polityka Architectural Award for the fifth time. Jordanki C[&]CC was ranked amongst the five finalists, which competed for this precious trophy with the International Congress Center in Katowice, the National Forum of Music in Wrocław, the Konieczny's Ark in Brenna and the Little Yellow Elephant (Żółty Słonik) Building in Ostrów Mazowiecka.

"This is another distinction for Jordanki C[&]CC. In April, the Center was awarded the Brick Award 2015 title in the "Jury's Selection" category as well as the II Prize in the "Construction of the Year 2015" contest. I'm proud to say that Mostostal Warszawa, as the general contractor of the building, has had its share in the success. For this project to be achieved, we had to extend beyond the previous framework and use innovative methods. The concert hall features unique design and layout made entirely of concrete-brick and concrete-tuff conglomerates, starting with the structure through the facade or ceiling and wall linings. For the purposes of this "unique concrete architecture", we decided to erect our own concrete plant at the construction site. To build the facility, an innovative technology, the so-called PIKADO, was applied. The Toruń hall goes perfectly with the city's historic architecture while preserving its original character. That's why it astounds us nowadays. It is through such projects that Mostostal Warszawa attempts to open a path to construction of the future," says Andrzej Goławski, President, Mostostal Warszawa.

The Center was built in accordance with a design by Fernando Menis inspired by the gothic architecture of Toruń. The designer embedded a modern concrete-brick facility into an ancient city development. During its construction, a wide range of solutions, previously unseen in Poland, were applied. For example, the building facade was made with the use of the PIKADO technology and the large concert hall was separated from the small hall with a mobile partition.

Jordanki is one of Poland's principal cultural projects completed over the past years. It features six levels and an approx. area of 22 000 m2, an 880-seat auditorium and a 300-seat outdoor stage as well as technical, administration and social backup facilities. This concept involves a concrete-brick hall partially submerged below the ground level.

During the 2008 World Architecture Festival in Barcelona, the Jordanki C[&]CC project was awarded the "Best Building of the Future" title in the "Culture" category. Numerous articles have been published regarding the Toruń-based project (e.g. in "El País", "Corriere della Sera", "Wallpaper"). Grzegorz Piątek, an architectural critic, defines Jordanki as the "most radical and original building of the year 2015."