Internet users chose the name of the TBM machine 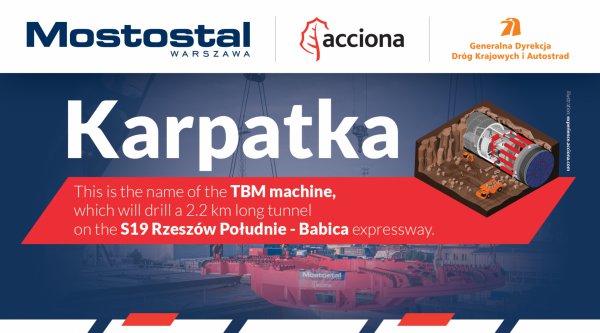 Karpatka - this is the name of the TBM (Tunnel Boring Machine), which will drill a 2.2 km long tunnel on the S19 Rzeszów Południe - Babica expressway. More than 6,000 votes were cast for this name in an online survey. with approx. 9 thousand votes, and the advantage over the next proposal was significant.

Entries for the "Name the TBM machine" competition were collected until November 23, 2022. In total, 1,500 applications were submitted. After taking into account repetitions and incomplete applications, 348 unique proposals were received, which were evaluated by the competition committee. The committee was composed of representatives of GDDKiA, the Ministry of Infrastructure and the contractor - a consortium of Mostostal Warszawa and Acciona Construction.

The names with the highest scores by the competition committee were indicated in the survey. Internet users decided which of the six proposals was chosen. Votes in the survey could be cast until December 16, 2022. Karpatka won decisively (6073 votes), followed by Big Mi (822).

Other names that could be voted for were:

The winners of the "Name the TBM machine" competition are people whose unique name suggestions made it to the second stage. In the event that one name was proposed by more than one participant, the competition committee selected the winner from among these participants by drawing lots. The winners will be able to visit the construction site of the tunnel on S19 Rzeszów Południe - Babica. They will also receive a set of promotional gifts from GDDKiA and the contractor - a consortium of Mostostal Warszawa and Acciona Construction.