Groundbreaking ceremony for the construction of Vis á Vis Wola 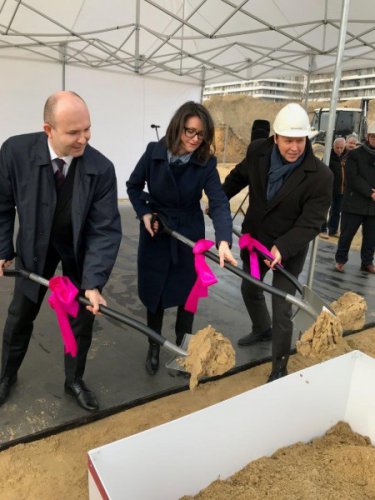 On November 10, 2017, the first shovels were driven in for the construction of the 1st stage of the Vis á Vis Wola in Aleja Prymasa Tysiąclecia 83 – one of the key residential projects of the PHN Capital Group. The event was attended by representatives of PHN SA and Mostostal Warszawa.

A residential complex as part of Vis á Vis Wola in Aleja Prymasa Tysiąclecia 83 will provide 213 apartments in the 1st stage with a total area of ca. 13,000 sq.m., situated in two multi-family buildings with underground garages and a recreational yard. The project will be distinguished by modern architectural form, varied numbers of storeys and a prominently exposed ground floor with service facilities. The next stages of the project include 253 apartments and a modern office building, which will provide more than 13,500 sq.m. of total area. PHN Group has already obtained the necessary final permits for building both stages of the residential complex.

‘We are delighted nearly month after handing over the construction site to the general contractor, the first stage of the project is starting. In mid-November 2017 we are beginning the sale of apartments. We share a strong hope that apartments offered within Vis á Vis Wola estate will enjoy at least the same or even greater interest of the buyers than Yacht Park in Gdynia, another residential project of PHN Capital Group. We are all more pleased that the symbolic shovel was driven only a few months after the announcing the new strategy of PHN Group for the years 2017-2017, adopted in April this year. I would like to remind that previous strategy of the company didn’t include activities on the real estate market’, said Maciej Jankiewicz, President of the Management Board of PHN SA.

At this point, Mostostal Warszawa realises several residential projects in the capital city, including Wola district, which is one of the most dynamically developing parts of the city. Recently, we’ve also signed new contracts in the area of general construction. That shows the market is still really promising. During construction of Vis á Vis Wola, we’ll be partnering a new client. We are pleased to start new cooperation especially with PHN Group, one of the leading developers on the commercial real estate in Poland. We’re going to start 1st stage of the project. I believe our partnership will be long-term and fruitful’, said Andrzej Goławski, President of the Management Board of Mostostal Warszawa.