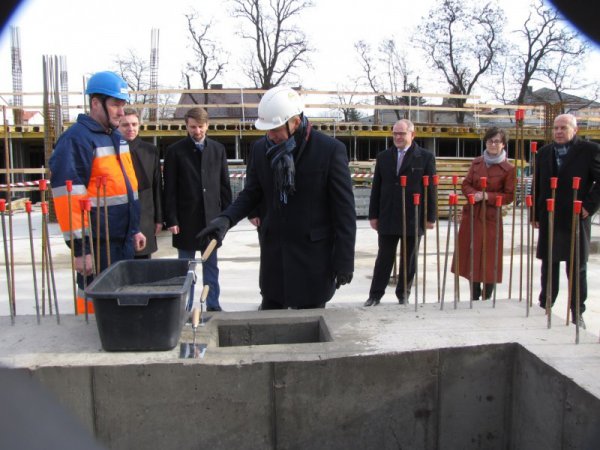 Mostostal Warszawa has officially inaugurated the construction of the Mediateka in Piotrków Trybunlaski, a modern library destined to be a centre of science, culture and education. Today, we celebrated a groundbreaking ceremony at Plac Pofranciszkański.

A symbolic groundbreaking of the Mediateka took place in the presence of Jarosław Czuba, General Director in the Ministry of Culture and National Heritage. The ceremony gathered many local guests, engaged with the city’s matters. To start with, there were present: Krzysztof Chojniak (President of the Piotrków Trybunalski), Marek Mazur (President of the Sejmik of the Łódzkie Voivodeship), Rafał Czajka (Vice president of City Council), Jacek Michalak (Director of Infrastructure and Agriculture in the Office of Governor of the Łódzkie Voivodeship), Renata Wojtczak (Director of the Municipal Public Library). Further, on behalf of Mostostal Warszawa the event attended Andrzej Goławski, President of the Management Board, Dariusz Jarek, Director of General Construction Area, and Artur Soczewica, Director of Central Branch. The grounds at the construction site were also blessed.

The construction of the Mediateka is one of the key projects in the revitalisation of the Old Town and Podzamcze. The facility has been designed as an open book and is destined to be more than a usual library. The Mediateka is to be a meeting point that integrates generations, a multimedia educational and cultural centre for citizens.

‘We’re happy that Mostostal Warszawa was appointed general contractor of the facility which is going to fulfil a crucial role in the city’s revitalization and development of the local community. The Mediateka will be a multifunctional centre, open to a wider audience than just readers. It will provide access to the world of knowledge and science based on very attractive, modern approach to all inhabitants of Piotrków and surroundings. It will also create cultural and recreational space, especially for young minds’, said Andrzej Goławski, President of the Management Board of Mostostal Warszawa.

The three-storey building of 7 447,87 m2 of total area will offer a centre of science, interactive history of the city Piotrków Trybunalski, conference room which can be also used as a cinema, playroom for children, computer game room, experiments and workshops rooms and a café. Central Branch of Mostostal Warszawa was appointed general contractor of the project. The contract value amounts to PLN 33 million.

‘At this point, Mostostal Warszawa is performing several projects which are going to contribute to the educational and scientific development of Polish cities. The company is general contractor of the new didactic facility for the AGH University in Krakow. There will be held a seat of the Faculty of Electronics and Telecommunication. Further, we inaugurated its construction recently. We celebrated the foundation stone laying ceremony in the beginning of January’ said Darek Jarek, Director of General Construction Area.