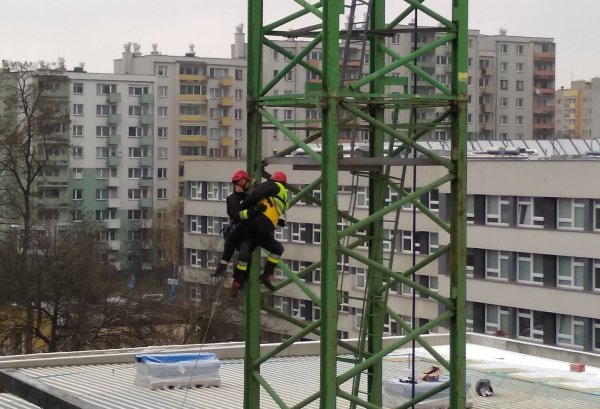 Employees of the construction site of the AGH UST Sports Hall carried out a campaign to attract a crane operator in accordance with the highest standards prevailing in Mostostal Warszawa.

On December 7, the tower crane operator reported feeling unwell to the construction supervisor (e.g. lack of strength and dizziness), which made it impossible for him to continue working. Upon reaching him, the Works Manager stated that the operator was conscious and aware, but he was not able to leave the crane's cabin on his own. Therefore, an immediate decision was made to call the emergency services by calling the emergency number 112. At the same time, the work taking place within the crane's working range was suspended. A representative of the crane supplier was notified of the incident, then arrived on site and called a qualified person to secure the crane after evacuation. Until the arrival of the fire brigade, the construction supervision representatives ensured the accessibility to the construction site and the crane's power supply was turned off. The crane operator was taken to the hospital for research.

The construction workers properly carried out the evacuation of the crane operator and followed the Company's communication scheme in the event of unexpected situations.

Mostostal Warszawa is a signatory member of the Agreement for Safety in Construction - an initiative established in August 2010 by the seven largest general contractors in our country. The mission of the Agreement is to carry out activities to raise the level of work safety culture in the construction industry, and to eliminate fatal accidents on Polish construction sites.