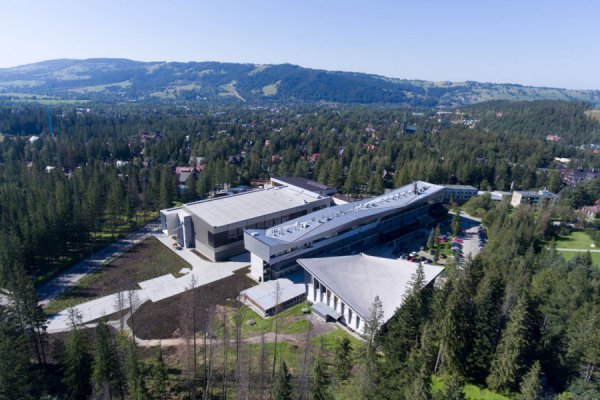 The winter centre of Poland has just gained a new sports facility – a multi-functional sport and recreational arena. The Mostostal Warszawa Southern Division has implemented the project at the order of the Central Sports Centre (COS) – Olympic Training Centre in Zakopane. Attendees of the formal opening of the facility (7 September 2016) included among others Witold Bańka, ministry of sports, Józef Plich, governor of Małopolska region, Jacek Krupa, marshal of the Małopolska Region, Piotr Bąk, Tatry district governor, Leszek Dorula, the Zakopane mayor, representatives of municipal authorities, Cezary Jurkiewicz – Director of COS OPO Warszawa, Sebastian Danikiewicz – Director of COS OPO Zakopane, and Grzegorz Kotowicz – Director of COS OPO Szczyrk responsible for the sports hall project. On behalf of Mostostal Warszawa the attended were: José Ángel Andrés Lopéz – Member of the Board for Business Development and Janusz Stanaszek – Director of Southern Division.

– Up to now at the foot of the Polish Tatra Mountains we had no centre adapted to handling sports events on the one hand, and conferences or cultural events on the other. Such a facility was built thanks to Mostostal Warszawa in Zakopane. The Southern Division has already implemented a few top quality most modern sports facilities in Poland, yet for the very first time they did so in such a picturesque scenery. In the past sportsmen coming to Zakopane had at their disposal only an old hall dating back to the 1960s, which was simply unable to meet expectations of professional sports. The new hall provides an extension to the sort complex of COS OPO Zakopane, which will now be able to assure full handling of sports associations with respect to training Polish sportsmen to competitive sports. It should be borne in mind that for the past four years close to the new hall a sports boarding house has been operating, which we have renovated in the years 2011-2012. The hall facilities would also be available to local inhabitants and students of the Sports Championship School in Zakopane. I hope that conditions we have created will allow sportsmen to keep achieving better results. In addition, the town also needs centres adapted to holding various types of events – saidJosé Ángel Andrés Lopéz, Member of the Board for Business Development of Mostostal Warszawa.

The hall of the Central Sports Centre is the highest situated sports facility in Poland. Level 0 of the facility is at the level of 901.65 m a.s.l. The building is connected to the existing school boarding house and swimming pool via a corridor. The largest part of the hall is taken up by the sound-proofed sports hall finished with a parquet flooring of Canadian maple, which is suitable for basketball, handball, volleyball and futsal courts in accordance with requirements imposed by sports unions. In addition, the hall also houses gym area, training rooms for wrestling and judo, fitness room, 60-metre tartan racetrack with a facility for long jump and for triple jump, as well as back-up facilities with changing rooms. The facility has been fully adapted to needs of disabled. It is also an example of the deployment of a modern heating system.

– The building was erected in the passive construction technology and gained certification of the Centre of Energy Efficient Buildings from the Cracow University of Technology, which means that it is characterised by a lower demand of heating, and as an effect, its operating costs will be lower. The Hall is heated by a solar system and heat ground heat. For this we drilled 30 boreholes measuring 100 metres each. A system of gas boilers provides a back-up heating system for the building – added Janusz Stanaszek, Director of the Mostostal Warszawa Southern Division.