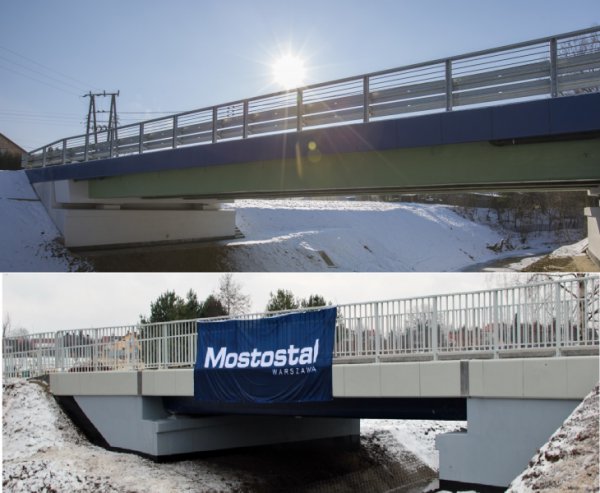 A year has passed since the opening of the innovative bridge in Błażowa. It was commissioned in February 2016 and has broken the world’s record in the span length. Many awards, appreciation of the experts in the construction business and of the scientists, two polymer bridges plus market interest in FRP composite – these are the effects of Mostostal Warszawa's efforts in the area of research[&]development and use of innovative materials in the construction sector.

On the basis of the innovative technology which has been developed by engineers of Research and Development Department at Mostostal Warszawa with the Promost Consulting company and scientists from the leading technical universities in Poland, two bridges made of FRP composite were constructed. The year 2016 began with innovations and ended the same way. In the autumn, after nearly 10 months since the opening of the bridge in Błażowa, the second bridge linked banks of brook Rujak in Nowa Wieś. Both of them were created in Podkarpacie district in the scope of the project entitled: 'Com-bridge - Innovative road bridge of FRP composites' co-financed by the National Centre of Research and Development as a part of pilot programme DEMONSTRATOR+:  'Supporting scientific research and development works in demonstration scale'. In addition, local community can take advantage of two special bridges, and there isn't so many around the world.

The bridge in Błażowa has opened a new chapter in the bridge construction in Poland. It is true that FRP composite has been used in the construction sector before (e.g. mainly in the construction of footbridges, for reinforced bars), but no one has ever undertaken the challenge to use them as a main structural component. We will not find a composite bridge in official classification. Lack of established standards for such structures required testing and a load test to be performed. Structural beams had been prefabricated using infusion technology. This method had also a pilot character. It is a great achievement of Mostostal Warszawa to introduce new quality into road construction. The perspectives of using FRP composite at the broader scale are encouraging. The mechanical features of FRP composite make structures much more resistant, lighter. They aren’t so exposed to deterioration contrary to e.g. steel elements. Its performance, taking into account minimum maintenance costs, is estimated at 50 years at least.

We invite you to watch our new video for more details about the construction and unique parameters of the composite bridges. Visit our You Tube and see how we build the future!