CKK Jordanki chosen one of the seven wonders of Poland 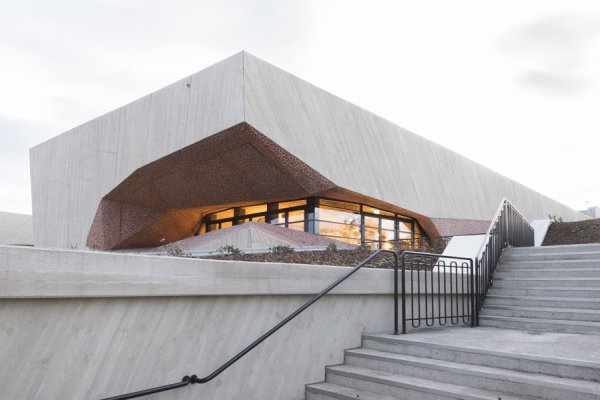 Cultural and Congress Centre Jordanki has become one of the seven wonders of Poland in the nation-wide competition organized by National Geographic Traveler Poland magazine. The hall in Toruń was opened in 2015. This is one of the most unique and most award-winning projects of Mostostal Warszawa.

The inauguration took place on December 12, 2015, and the ceremony was accompanied by a concert of Torunian Symphony Orchestra. Inside the center are located a large hall with a stage and orchestra pit, multi-level auditorium, open-air stage as well as modern conference facilities. The hall was designed by the world-renowned Spanish architect Fernando Menis. The author inspired by the medieval architecture of the city decided to reinterpret the history of Toruń. To this end, he used brick and concrete in the construction of the center in an innovative way. From this has emerged a concept of multi-functional, four modular concert hall of intriguing shape, which is partially submerged in the ground. The inside hides an exceptional entertainment and concert hall with an area of 22 m2

Thirty-two extraordinary places in our country fought for the title of one of the seven wonders of Poland. Voting continued until the end of August and from the very beginning CKK Jordanki was among the favorites. Nominating a concert hall in Torun to the competition jury justified that the building cannot be ignored because of its unique appearance, which combines different styles arousing admiration. In addition, another project of Mostostal Warszawa – Scientific Information Centre and Academic Library in Katowice was also nominated for the title. The official announcement of the results will be held during the tourism fair World Travel Show, on 14-16 October 2016 in Warsaw. Meanwhile, soon will be the World Architecture Festival in Berlin (WAF), in which CKK Jordanki are nominated for the award in the category of "cultural facilities". In 2011 at the same festival the design of the building won the competition for the future cultural facilities of the future.