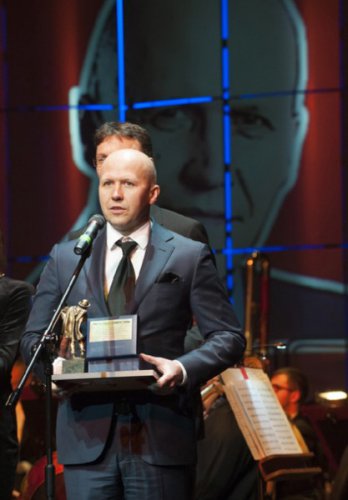 Toruń has gained one of the most modern concert halls in Poland. General contractor of investment worth PLN 157,97 mln gross is consortium: Mostostal Warszawa (leader) – Acciona Infraestructuras (partner). The festive ceremony was inaugurated by concert of Torunian Symphonic Orchestra under directory of Mirosław Jacek Błaszczyk.

Cultural and Congress Hall in Jordanki in Toruń was built according to the design of world class architect – Fernando Menis. The Spanish designer has admitted that while creating the project he was inspired by the architecture of Toruń, which is on the UNESCO Memory of the World Heritage list. The designer has reinterpreted the city's history by blending the modern brick and concrete design into the city’s historical architecture. The project has a good chance of entering Poland’s architectural history by becoming the most modern concert hall in the country.

The opening ceremony of Jordanki which was held on 12 December 2015 was accompanied by concert of Torunian Symphony Orchestra. Under the baton of Jacek Błaszczyk performed symphony no. 1 in C major, Op. 21by Ludwik van Beetchoven and piece specially composed for the ocasion by Piotr Moss ‘Hommage a Toruń’. The event brang together in Toruń many honorable guests. The Deputy Prime Minister prof. Piotr Gliński, ministry of culture and national heritage came. Fernando Menis, the designer of the hall also was present. Ángel Tellechea Goyena, honorary consul of Republic of Poland, came from Navarra. Representatives of partner cities of Toruń, parliamentarians, local government officials and many guests from national and regional culture and education institutions. The contractor and people involved in the investment supervision were also present.

Andrzej Goławski, President of Management Board Mostostal Warszawa, receiving special greetings for general contractor of the investment from President of Toruń, thanked on the behalf of consortium to all who were involved in the Centre’s construction, among others President of Toruń – Michał Zaleski, Marshall of Voivodeship Kuyavian-Pomeranian – Piotr Całbecki and President of CKK Jordanki – Grzegorz Grabowski and employees of Mostostal Warszawa involved in the realization of the investment, especially: Arkadiusz Biniek, Contract Manager i Robert Kiezik, Construction Manager.

„In every big city in Poland we can find another similar building that Mostostal Warszawa built which serves to its citizens and turists but also to its excepcional nature. Looking at Cultural and Congress Hall in Jordanki I am proud and happy that we make a positive contribution in development of Toruń. This is the next investment of Mostostal Warszawa, after Sports Centre at Nicolaus Copernicus University, Collegium Humanisticum or Centre of Quantum Optics in this beautiful city. For us, it is a great satisfaction and a reason to be proud - said Andrzej Goławski, President of the Management Board Mostostal Warszawa, during ceremony.

Concert hall in Jordanki has six floors, 22,000 m2 of floor space. The interior will house a performance stage fitted with an orchestra pit, a stage with 880 seats and an outdoor stage with 330 seats as well as utility, administration and social rooms. This is a concept of a partially immersed raw brick and concrete hall. The key objective was to create a multi-functional facility allowing a variety of symphonic and other concerts, theatrical performances, musicals, film projections and fashion shows to be organised.

A number of innovative Polish solutions have been used in the building of the Congress and Cultural Centre, one of which is PIKADO technology. This technology is designed to bring together broken and chaotically laid bricks on one side and fill all the gaps with concrete on the other side. Upon hardening, the concrete surface is hammered so that it is revealed as much as possible so that both a visual effect and appropriate sound parameters are achieved. In this way, Fernando Menis obtained the Gothic style that characteristic of Toruń's history and architecture.

The multi-purpose centre will include several modules connected at the top by glass plates, which will provide illumination and space. Moreover, the double-wall system will ensure heat savings and insulation from street noise. A mobile wall between the larger and smaller halls – the largest movable structure in Poland – is an interesting solution that will allow the acoustics to adjusted based on requirements.