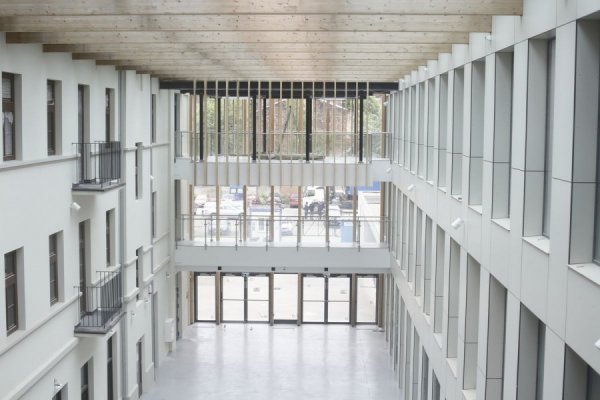 Project of transformation of gloomy and ruined tenement houses into the first council initiative for young entrepreneurs has been already finished. Center of Creativity Targowa was established in Warsaw Praga district. It is a place for companies that are taking their first steps in business and developing innovative ideas. General contractor of this project was Mostostal Warszawa.

Center is located in the vicinity of the famous old marketplace – Różycki and Museum of Warsaw Praga which was commissioned not so long ago by Mostostal Warszawa. The area of 3 200 m2 houses offices, conference rooms, exhibition rooms and information points. In addition, the building is equipped with technical facilities, storage rooms, reception and cafes.

The Center has been created to be start-up’s premises in order to facilitate newly founded companies to establish economic activity. The entrepreneurs of industries such as design, fashion, performance, architecture, movies and videos, music, radio, television, ICT, handicraft, advertising, photography, art and antics, publishing can count on preferential rental rates, courses, advisory services, support in promotional, informational, organisational matters as well as an access to the technical infrastructure.

Works on Targowa St. 56 lasted two years and encompassed revitalisation of the frontal building with northern outbuilding and construction of three-storey southern wing. The main building which is situated from Targowa Street side was entered in the register of monuments. For that reason the scope of the renovation works was enormous. Mostostal Warszawa rebuilt tenement houses, from basements to the roof, and adapted these spaces to the office and service standards. In the place of the two-storey southern outbuilding was created a new wing, higher by one storey. All buildings are linked together to ensure an easy passage between them. In addition, the Center has an internal glass-roofed courtyard.

Center of Creativity Targowa was built in the formula design and construct. Official opening of the facility took place several days ago. It is one of the first projects with which city authorities inaugurated revitalization of the Praga district. An amount of PLN 1.4 billion from the city budget will be used for this purpose until 2022. New contracts are to be announced soon and Mostostal Warszawa surely will be making bid offers.

Take a look at the pictures!