Aquapark Tychy with own power supply 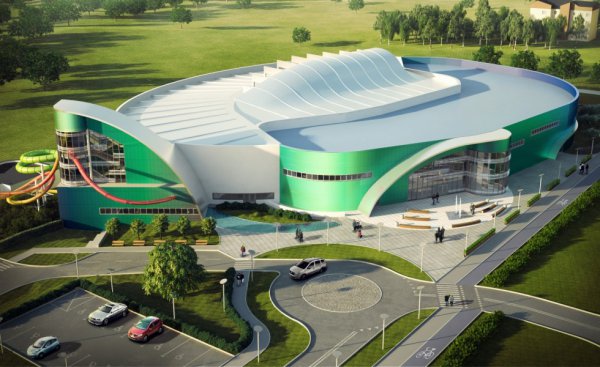 Aquapark Tychy has not been completed yet, but it is already known that this modern facility will be powered by renowable energy. Regionalne Centrum Gospodarki Wodno-Ściekowej will construct new pipeline connecting waterpark with municipial sewage treatment plant. As a result, the water facility in Tychy which Mostostal Warszawa is building, will become self-sufficient regarding heating and electric power supply.

Mostostal Warszawa entered the construction site in January 2015. The commission of the project which is being realized under supervision of South Region is set on June 2017. Aquapark Tychy will be one of its kind in Silesia and in scale of the whole country. The facility will accomodate sports section which will consist of 25-metre-long swimming pool and training pool with movable floor, two-level recreation space including, among others, swimming pool with artificial waves and children’s pools, fitness and wellness zone and gym, unique slides, saunas and beer spa, surf simulator and something that has never been before in Poland – Aqualoop slide, that is, a special chamber with trap door into a vertical slide in which we will ride down at a speed of 3xG, in other words, three times faster than the gravity.

Unfortunately, attractions such as, surf simulator and unique slides as aqualoop require high energy consumption and that increases operating costs of the facility. Therefore, Regionalne Centrum Gospodarki Wodno-Ściekowej opted for ecological energy, which is at the moment used to cover energy demand of the municipial sewage plant. The unique solution will allow to use excess of biogas produced from sewage and waste and  deliver it to the aquapark instead of to the gas grid.

Works on the pipeline which will connect aquapark in Tychy with sewage treatment plant shall start in March this year. Biogas will undergone inward processing first and then will be fed to the 6,5-kilometre-long pipeline. The energy and heat will be produced in cogeneration generators which are located in the waterpark. Thanks to that, aquapark will be powered only to a small extent with heat energy and electricity from the grid. It will permit to reduce operating costs even by dozen percentage points.

„As regards progress of the works on the site, we are at final stage of the project’s core and shell construction at present. The completion of structure and roofing is forseen for end of March. In parallel, all installation works are in progress (electrical works, plumbing, ventilation, swimming pool water treatment and gas network), assembly of aluminium façades, road works outside the facility as well as fitting works such as plastering and floor laying. It is planned that in a few weeks construction of lightweight partition walls and first assembly works of steel swimming pool basins will start – said Tomasz Rywacki, site manager Mostostal Warszawa.