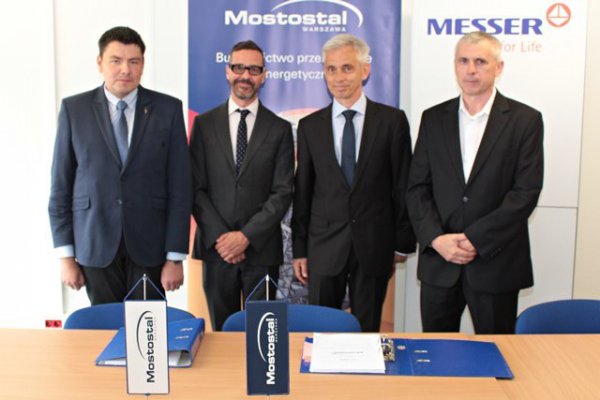 The agreement entered into between Mostostal and Remak concerns completion of the assembly works covering a pressure section for boilers K-5 and K-6 within Package 1, i.e. assembly of screen shrouds, screen walls and elevation of the internal grate along with boiler heater and superheater elements up to their target location. The last task of the assembly works is closing the boiler with the funnel. "This is the largest and most complicated boiler assembly package which remains as a prerequisite for the subsequent works and pressure tests for the entire boiler. The contract also covers partial works from Package 2 which includes full completion of over 30 000 joints and connections aimed to combine heater and superheater elements with collective chambers," says Jarosław Żemła, Director of Installation and Field Processes at Mostostal.

Under the contract, a complex internal grate (OTG) pulling operation will be carried out. It will consist in elevating the 900-ton steel structure by means of hydraulic lifting cylinders and special steel lines up to the height of 120 meters. To improve the welding process, Mostostal will also build a main argon distribution system designed to feed argon to specific welding stations. The gas will be provided by Messer Polska Sp. z o.o. In addition, the company entered into an agreement with Energomontaż – Północ – Technika Spawalnicza i Laboratorium Sp. z o.o. for performing non-destructive tests of the welding works.

"Mostostal Warszawa specializes in projects featuring high complexity level. Quite a few of them mean milestones for the Polish construction industry. Undoubtedly, the expansion of the Opole Power Plant is one of such projects. It is currently the largest industrial project across Poland and one of the largest investments across Europe, and the agreement concluded with Remak is one of key subcontracts concerning completion of the project," says Paweł Żbikowski, Head of the Opole project at Mostostal.

According to the schedule, assembly works covering the K-5 boiler pressure section will begin in October of the current year and should finish in December 2016. The K-6 works will be commence in April 2016 and should last until July of 2017. Each stage will end with a pressure test.

During the course of the upcoming months, Mostostal will also build main tower cranes at the Opole Power Plant for the purposes of K-5 construction and then the company will assemble the main steel structure on which the entire boiler will be installed.