A topping-out ceremony held at Center of Creativity Targowa! 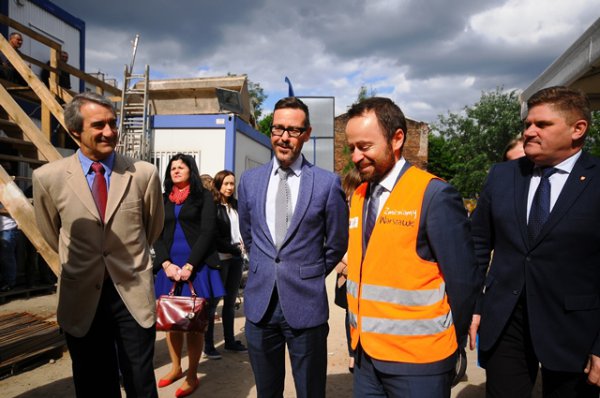 A symbolic topping-out ceremony, which took place on May 13 at the project site, was attended by the representatives of the Capital City Town Hall and General Contractor – Mostostal Warszawa.

A symbolic topping-out ceremony, which took place on May 13 at the project site, was attended by the representatives of the Capital City Town Hall and General Contractor – Mostostal Warszawa.

The Center of Creativity Targowa is another project of Mostostal Warszawa under completion for the Capital City Development Authoirty located in close vicinity of the Museum of Warsaw's Praga commissioned last year.

Mostostal Warszawa SA is in charge of the project and construction of the entire Center of Creativity complex, including the inner courtyard. The project covers construction of the building's three-storey southern wing, courtyard roofing. The existing front building and five-storey northern annex will be adapted for office and service purposes. The project is valued at PLN 22,9 million.

"Projects completed for the Capital City of Warsaw are of particular significance to our company which has become an integral part of Warsaw's landscape by contributing to building and rebuilding numerous facilities within the city limits. Beginning with the first project, the reconstruction of the Prince Józef Poniatowski Bridge in Warsaw, through the majority of bridges (excluding the Maria Skłodowska- Curie Bridge), and ending with the Siekierkowski Bridge, the Rotunda, the Grand Theatre, the Sejm, or revitalization of Krakowskie Przedmieście which - to a large extent – brought the Royal Route's entertaining function back to live by becoming a place where the residents of Warsaw can socialize. We are proud of being the builders of the initial section of the first Polish subway line. We are completing projects across the entire country, but we're a Warsaw-based company – the fact we've been proudly and consistently emphasizing in our company name and logo – and projects for our city are treated with priority as they mean a lot to us," - Jose Angel Andres Lopez, Vice-Chairman of the Production Board at Mostostal Warsaw said.

The Center for Creativity located on Targowa Str. 56 in Warsaw's Praga district, will play the role of an entrepreneurship incubator dedicated to creative launches in fashion, games, architecture, advertisement and arts sectors. The 3 200-square meter area will accommodate office rooms, conference rooms, showrooms and advice centers. The front building's ground floor will include an entrance hall, a reception and a coffee shop. The gate entry leading from Targowa street into the inner courtyard will be half closed on both sides by means of glazing forming an entry area. The underground section will house technical rooms and storage facilities.

"Works are progressing as scheduled. Structural works have been finished in the northern wing and front building; assembly of aluminum windows and finishing layers of the roof have begun. Currently, roofing assembly and internal finishing works are under way," - Robert Nowak, Contract Manager said.