Composite bridge of Mostostal Warszawa in the final of prestigious PARP’s competition! 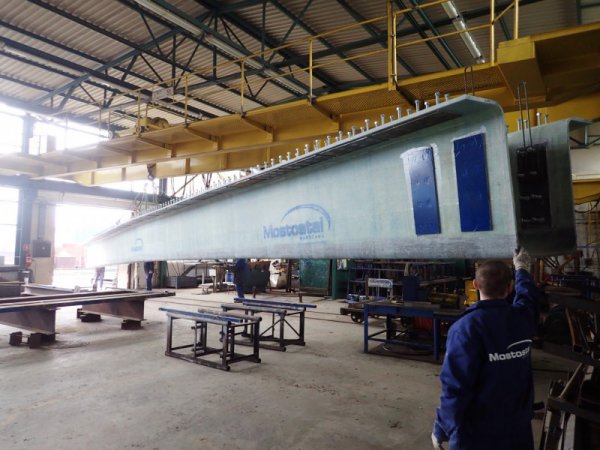 One of the few in Europe and the largest in the world in terms of span length innovative bridge made of composite materials reached the final of the Polish Product of the Future competition. To the prestigious title awarded by the Polish Agency for Enterprise Development (PARP) is nominated 40 innovative projects.

Construction of the bridge was completed in December 2015. Since it has been launched, it is available for use.  At the moment is conducted validation of the basic performance parameters in demonstration scale in real-world conditions.The project was realized by consortium led by Mostostal Warszawa and comprised of Promost Consulting company from Rzeszów and Rzeszów University of Technology  and Warsaw University of Technology. On behalf of Mostostal Warszawa in chargé of the project was a team of Research and Development Department composed as follows: Juliusz Żach, Lech Własak i Piotr Świeżewski.

The bridge designed in the project Com-bridge was created despite lack of generally established standards for composite constructions.  Therefore it was necessary to perform a numerous research on composite materials, bridge elements and finally to apply test load. The results confirmed high rigidity, persistence and above all high degree of safety of its structure.  According to the numbers, the bridge could be even lighter and optimised. The project Com-bridge created a cradle for plastic materials and demonstrated the maturity of composite bridges technology.

Mostostal Warszawa SA has all the necessary resources to manufacture composite beams. At the moment the company is concentrated on increasing its production capacity. Since the bridge has been launched, the company received 5 enquiries for the construction of similar constructions (from Poland and from other countries). The first commercial projects are to be realized after project will be completed, that is, in 2017. With the title of Polish Product of the Future composite bridge in Błażowa will get a support of the Polish Agency for Enterprise Development in such promotional activities as: presentations of the product at the international fairs, innovative exhibitions across the country and abroad and in publishing houses and promotional materials of the Agency. Winning the competition would pave the way for composite bridge technology on the European Union and international markets. In addition, it would also confirm the leading role of Mostostal Warszawa in the area of innovations among Polish construction companies.

Congratulations to the team! We are keeping our fingers crossed!

Take a look at the video about bridge in Błażowa on our YouTube!